GladWire
Animals Thought To Be Gone For Good 10 years Later These Lovable Little... 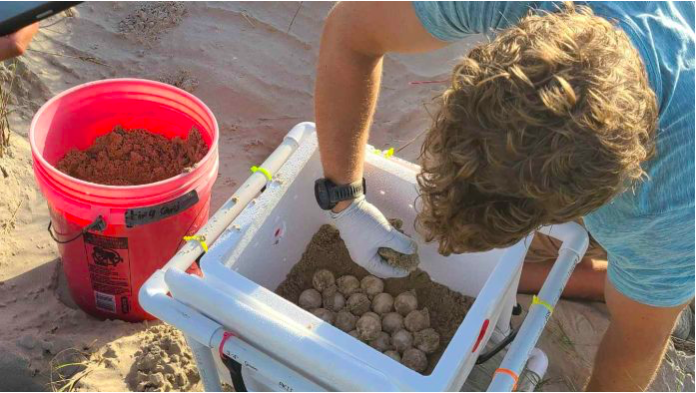 After disappearing for a decade, some lovable little animals have beaten the odds.

A routine survey in Galveston Island State Park uncovered a nest of 107 precious turtle eggs belonging to a Kemp’s Ridley sea turtle. These critically endangered species are the world’s most endangered sea turtles.

It’s been a long, lonely decade for Texas A&M’s Sea Turtle Patrol, which hasn’t discovered a turtle nest in the Lone Star State since 2012. The thrilling discovery came to an end in mid-May when the eggs were transported to an incubation center, where their chances of survival increased from a remote possibility to a near-certainty.

Kemp’s Ridley sea turtles are smoother and smaller than more well-known species such as Green, Loggerhead, and Hawksbill sea turtles. It’s one of only two species in the genus Lepidochelys, and it’s been around for about 160 million years in its current form.

They are widely distributed throughout Mexico, but have only been found in Texas.

Aerial surveys conducted on the beaches of Rancho Nuevo, Mexico, in 1947 confirmed that this species used to arrive by the tens of thousands, but a catastrophic population loss ensued.

“A lot of nesting habitat for the Kemp’s Ridley has been lost to storms, high tide and predation, which is why it is important to transport these nests to an environment where they have the best chance for survival into adulthood,” said Christopher Marshall, Director of the Gulf Center for Sea Turtle Research and Professor of Marine Biology at Texas A&M University at Galveston.

By 1980, conservation efforts were focused on reintroducing this marine reptile to its former swarms, and by the 2000s, 10,000 individuals were recorded nesting on Padre Island National Seashore.

Two major population declines followed, and by 2014, the number of nests found on Padre Island each year had dropped by 45 percent. They vanished completely on Galveston Island.

Conservation efforts are ongoing, with the Smithsonian reporting that approximately 5,500 individuals nest on Mexican beaches and 55 nest in Texas. Returns to old breeding grounds are a strong indicator of population recovery, and hopefully A&M’s Turtle Patrol will not have to wait another ten years to find the next nest.