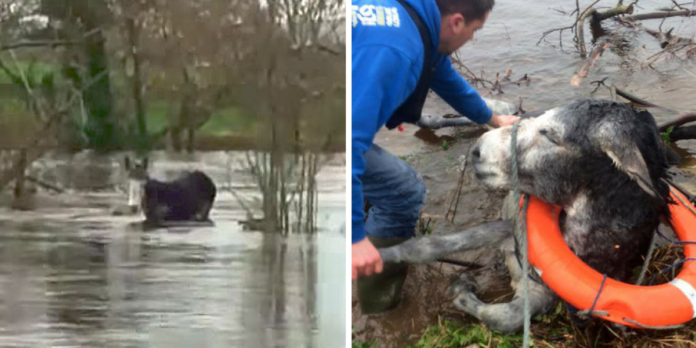 The donkey is a beautiful animal that seems to get a bad rap most of the time, but this creature is intelligent, strong, very curious and has been used since ancient times to aid with the collection of water and wood and in land cultivation and the transportation of produce to market all over the world.

That is why today’s tale of the donkey, so to speak, is an amazing story that displays the animal’s survivor and team player characteristics in times of danger.

Our story unfolds in the flooded town of Killorglin, Ireland. A Facebook user has alerted the public about a code red or emergency in status involving a stranded donkey that has attempted to cross the flooded neighborhood fields by himself.

Storm Desmond made crossing the fields impossible and had destroyed the animal’s paddock. The donkey, named Mike, had no choice but to begin walking along the rising waters.

The poor animal stopped walking through the fields when the levels reached up around his chest, sensing the danger surrounding him. The Facebook post alerted the public with a photo of the trapped donkey in the swollen waters standing stoically alone. The Facebook user asked online for a boat, some rope and strong men to hurry and rescue the poor donkey.

People responded almost immediately, and a fast-moving motorboat was on its way to save the beautiful “Irish donkey.” You can check out the incredible photos and action posted in a sweet vignette here on YouTube. Animal Heaven Rescue were the heroes of the day and brought the handsome donkey back to dry land.

They had tossed an orange life preserver around the donkey’s neck as they moved him closer to the boat. The donkey complied and did everything to help the rescue crew bring him in step by step.

In the end, the donkey’s huge grin is infectious, and this is a feel-good story for the family.

To play safe and ensure that Mike had suffered no injuries after being up to the chest in the swollen waters, he was treated with extra tender loving care.

His owners dried him off with plenty of towels to warm him up and then served him a big bowl of hot mash. A veterinarian was called to stop by and make a visit, and he put the donkey on a round of antibiotics to make sure the beautiful creature would not develop pneumonia or any other serious condition.

Luckily, the smiling “Irish donkey” is doing well, healthy and has lived to tell the tale, no pun intended.

That was one grateful animal that understood the power of human bonding, and it’s a beautiful ending to a frightening story.

If you’re thankful this poor donkey was rescued and is safe because of these helpful people, please SHARE this!