GladWire
Daily Grace When The Rescuer Arrived On Scene He Heard The Pounding & Time... 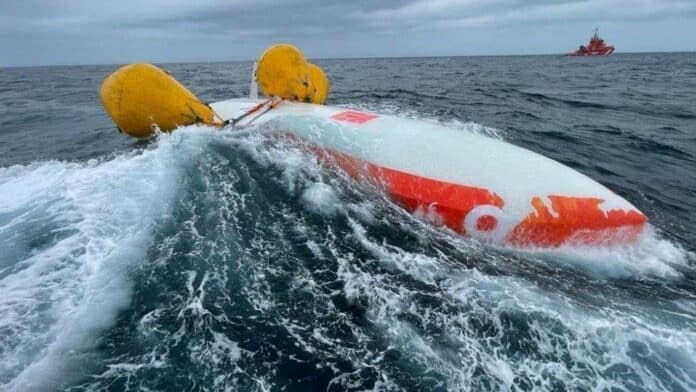 On August 1, a boat capsized in the Atlantic Ocean. According to the BBC, a French sailor who had departed from Lisbon late that day sent out a distress signal, alerting the Spanish coast guard.

Three helicopters and a rescue ship with five divers were sent to locate and save the 62-year-old who was in command of the 40-foot boat.

A rescue diver was winched onto the ship’s hull to look for signs of life after the coast guard discovered the capsized vessel 14 nautical miles off the Sisargas Islands in Spain’s northwest Galicia.

According to the BBC, the French sailor pounded on the inside to let the rescue crew know he was still alive.

The issue? The sun had set and the waters were too choppy. No effort at rescue would be made until the next morning. In order to prevent the boat from sinking, the rescue team fastened buoyancy balloons to it. They then waited for dawn.

According to coast guard divers, the Frenchman’s survival was “verging on the impossible” at that moment, as reported by the BBC. According to Spanish television, the operation was “on the edge of the impossible.”

Two divers dived beneath the boat in the daylight to save the sailor. He was discovered by them in an air bubble beneath the boat, covered in water up to his knees and wearing a neoprene survival suit.

After spending 16 hours in the air bubble, the French sailor dove into the frigid water and swam under the boat in the direction of the ocean’s surface. He managed to reach the surface with the aid of divers, a coast guard informed the BBC.

After that, the Frenchman—who remained unnamed as of Monday—was flown to the hospital for a checkup.

On Twitter, a video of the rescue was posted by the official account of the Spanish Maritime Rescue and Safety Society.

“Each life saved is our greatest reward,” it said.

Some claim the French sailor’s survival through the night was a miracle. Some could refer to it as luck.

Naturally, luck means blind chance. On the other hand, a miracle necessitates some level of supernatural involvement.

It is an ancient debate.

On the one hand, there is the viewpoint supported by Stephen Hawking, according to which the Big Bang—rather than God—created the universe spontaneously.

On the other hand, there is the long-held belief that God created the cosmos and everything in it. This group includes Thomas Aquinas, Sir Isaac Newton, and countless more.

Which category do you belong to? We are all forced to make a decision. And it completely alters everything. Your viewpoint is determined by whose side you support. Your interactions with other people, your attitude and conduct, and your values are all influenced by your worldview. Everything.

I’m curious about which group the French sailor belongs to. Even though he didn’t believe in God before the tragedy, if he thinks his survival was a miracle, he must be in awe of the marvel of not just his survival but of existence itself.

If he belongs to the Hawking camp, then the rules of physics forced him to rely on chance in order to survive. It was simply another incident in a never-ending string of meaningless occurrences.

In other words, his life would be nothing more than a story recounted by yet another idiot, full of commotion, dread, love, hopeless optimism, and a constant sense of impending catastrophe. All in all, the sailor’s life would have been meaningless. Nobody is willing.

Can science explain certain marvels, such as a sailor spending 16 hours confined in an air bubble? No doubt. The enigma of existence, however, is beyond the scope of science.

Some miracles defy reason and explanation by science. They are a mystery now and always will be. These mysteries serve as a reminder that humans are not gods. They humble you. They’re great.

The fact that the sailor survived can serve to remind the faithful of the wonder of life—and of their own existence.

Thanks be to God.