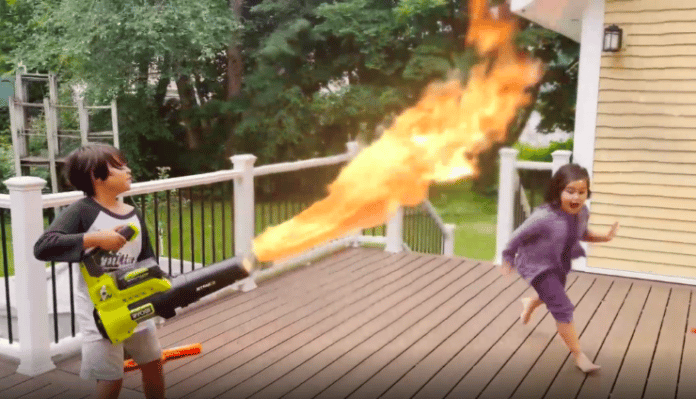 Of course, you can’t just hand your child a real flamethrower and let them have it. That would be far too dangerous, but one father took matters into his own hands and transformed a leaf blower into a magnificent and impressive-looking “flamethrower” toy for his kids.

The prop was constructed by 39-year-old animator Daniel Hashimoto using a leaf blower and vibrant silk.

Daniel, a senior content developer from Canada’s Gulf of St. Lawrence province of Prince Edward Island, said: “My wife Mandy and I love building random things like this for fun, hoping to inspire creativity for the kids. So far, it’s paid off!

“We hovered ping-pong balls, did slow motion videos of our hair blowing in the wind, tried inflating a fitted sheet like a big marshmallow, and finally – ‘the flamethrower’. Mandy had bought the kids some play silks that they use for homemade forts. We decided to see how the lightweight fabric might play with the blower, so Sophia grabbed a large rubber band and some tape, and we affixed it to the nozzle. The result was even more spectacular than we imagined – large billowing waves looked remarkably like flames – and so the device immediately was dubbed ‘the flamethrower’. The children all took turns chasing each other in a game of ‘Flame Tag’. We also played a jump rope over the flames game, and the children acted out a ‘fire bending’ play. To the children, it was not a deadly weapon, but more a dynamic and giggle-inducing obstacle. When you’re a kid – play time is epic! You can imagine larger-than-life scenarios. We definitely want to encourage imaginative play, creative problem solving and inventing a fun new game out of what’s lying around. I believe that most children can turn this kind of imagination into being good at improvising, and dealing with challenges.”

Mandy Richardville, Daniel’s 41-year-old wife, and their two kids live with him.

Most thought the video was pretty cool – especially after Daniel added the special effects making the silk look like real flames – but there were naysayers.