GladWire
Awesome All Because Of Chocolate A Wild Grandma Defies Death To Help Those... 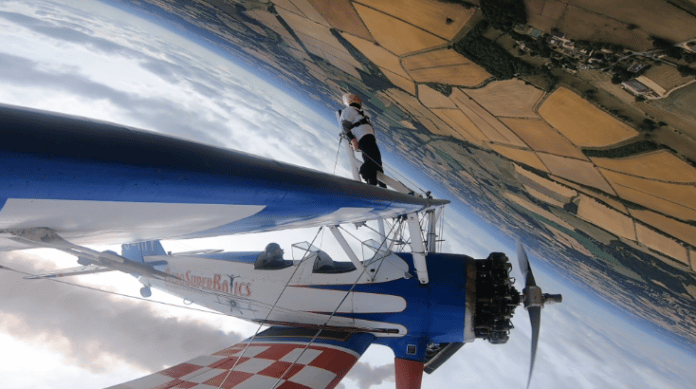 After being motivated by a TV commercial for a chocolate bar, a 93-year-old grandma performed a wing walk for the FIFTH time.

In an effort to collect money for the charity Sue Ryder, Betty Bromage fastened herself to a biplane’s wings.

At the age of 87, she originally made the decision to take on the nerve-wracking fundraising challenge after witnessing a wing walk in a Crunchie Bar TV commercial.

Betty said, “You never know what you can do until you try. I was in my late 80s when I first tried this. ‘Before that, the most dangerous thing I did was riding horses! Wing walking is not something I had ever really thought about, but I wanted to raise funds for charity so I started to look into the things I could do. At my age, I can’t run, so I looked for other ideas and took inspiration from the Crunchie wing walking advert. I thought I reckon I could do that and that’s what started me off!”

Since then, courageous fundraiser Betty has accomplished four wing walks, the fastest Zip Wire in the world in Snowdon, and an abseil down the 161-foot Eagle Tower in Cheltenham, all while earning more than $23,000 for regional charities.

On August 4, she performed her sixth wing walk with AeroSuperBatics at Rendcomb Airfield, close to Cirencester.

She said, “I want to prove that I can still do it! As you get older things aren’t as easy as they used to be, but I really want to give it a go. My neck is a lot better than it was as my osteopath has been really working on it – at one point I couldn’t even turn my head. Being able to get up onto the plane and back down again is achievement enough for me. My dear daughter-in-law and grandsons back me up all the way.”