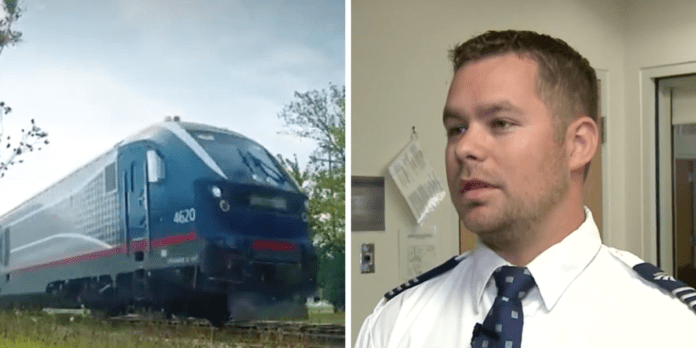 When taking a walk, most people tend to put in some headphones and listen to music. It never really causes an issue for most people. But for one man, Cody Paugel, it almost cost him his life.

Cody was walking along the railroad tracks, listening to his music like almost any other day. But this time, it was different. Danger was in his path. But what could possibly go wrong while walking along the tracks? The fact that a train was coming and Cody couldn’t hear it.

“I heard a noise behind me. I’m not too sure if it was the horn or the train itself,” said Cody.

Nevertheless, by the time he heard it, it was too late. He didn’t have time to react before the train came along, tossing him up into the air. The impact was so great, that his shoes even flew off. And before he knew it, Cody was out cold on the ground.

But Cody wasn’t ready to die yet. And train engineer, Jerry Sternig, wasn’t about to let it happen either. He had initially tried to slow down the train, but it wasn’t working. He kept thinking to himself, “Please get out of the way,” but Cody didn’t move until it was too late.

Sternig didn’t even realize the train had then stopped and saw Bertrand, his coworker, run off the train to go help Paugel.

But when he did, he was caught off guard by the scene in front of him. It was bad, yes, but they were left amazed. Cody was alive, and was even able to talk to them, as his first words were, “I’m sorry, It was stupid, I’m sorry.”

The two men then continued to keep him conscious, and make sure he was okay and breathing and not bleeding until the ambulance arrived.

Paugel was then taken to the hospital but has since received 31 surgeries so he could fully recover from the impact.

That was all 5 years ago. And now, Paugel has reached out to Amtrak to thank those 2 men, Sternig and Bertrand, for saving his life. But this was not a thank you that a well written out letter could cover. It had to be done in person, and that’s exactly what he did.

“If you guys wouldn’t have stopped, if you didn’t come out, I honestly probably wouldn’t be here,” Cody said to the two men.

We are so thankful that these two men stepped out of the train to help Paugel and ensure that he would be okay. If they hadn’t done so, this would have been a devastating outcome. If you’re thankful too, please SHARE this story!