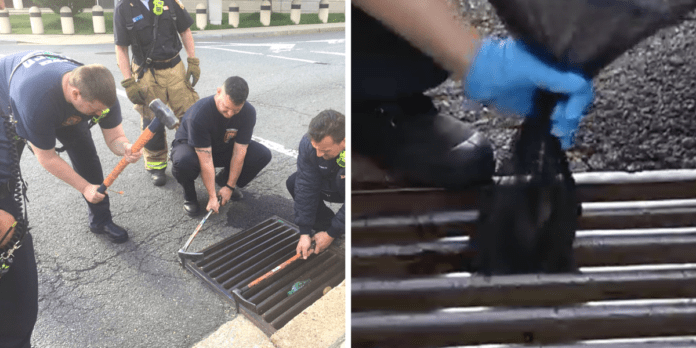 Everyone loves a good rescue story right? They love the “damsel in distress” who is then rescued by some hero, or their knight in shining armor. But this rescue is a little different, and doesn’t involve some hopeless victim, but instead a few tiny helpless little ducklings.

At the intersection between 12th Street and Main Avenue in Washington D.C. a few little ducklings, 8 to be exact, found themselves in a little bit of a dilemma as they crossed the street with their mother duck. The only problem was, they didn’t make it across the street.

No, they weren’t run over or anything like that. They had just fallen into the storm drain. After one fell, they all fell, and after that, there was no escaping by themselves. They were stuck and needed some major help.

But this mother duck didn’t plan on leaving her baby ducklings so soon. She stayed there, and waited, only hoping that someone would come by and save her babies so they wouldn’t die. But time was ticking by, and there didn’t seem to be help anywhere.

But as hopes began to look down, the heroes arrived. And they were exactly what these ducklings needed. D.C.’s Fire and EMS, Animal Care and Control, the police department, and even the Water and Sewer Authority all came to rescue the poor innocent baby ducks.

The rescue team tried removing the drain cover, but they weren’t successful. But they knew they had to find some way to get the little ducks out. But without getting the cover off, they didn’t know how they were going to do it. For a bit, it almost seemed impossible.

Finally, they had an idea. They decided the best thing for them to do is use nets, and lower them down so they would be able to lift them right back up to their mother.

And after half an hour of trying, all 8 ducklings were reunited with the mother duck and were as happy as could be. And we are happy too! These babies definitely deserved to be back with their momma!

We are so thankful that these groups of people teamed up together to save these poor 8 ducklings. And we are sure that their mother is thankful too!

If you are glad these baby ducks were rescued and now get to continue living their life with their mother, SHARE this post today!