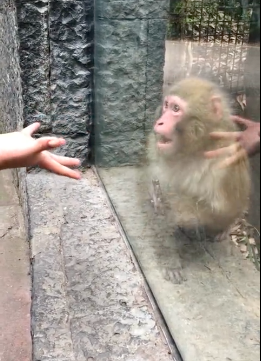 Who doesn’t like magic tricks? There is just something special when someone does a trick that we can not comprehend. Like making an object disappear, making something float in thin air, or even sawing a person in half. People pay tons of money to see famous magicians including David Copperfield, Penn and Teller, Michael Carbonaro, etc., all around the world perform. But this Japanese macaque monkey was lucky enough to have the performance come to him.

Maximiliano Ibarra is the magician that performed a magic trick to the monkey. Maximiliano Ibarra visited the Chapultepec Zoo in Mexico, when he decided to perform a disappearing trick to the monkey. The monkey’s reaction could not be a better reaction to get on camera. The viral video captures the reaction of the monkey as the vanishing trick was being done. When Maximiliano, the magician, started the trick by getting a leaf that he picked up from the ground to make it disappear, the monkey did not really pay much attention and instead was more focused on something he was eating. But as soon as the monkey saw that Mr. Ibarra ran his hand over the leaf and made it disappear, he was amazed.

The monkey’s jaw dropped as the leaf that was once there all of a sudden vanished. A funny video shows the monkey’s eyes open wide as this trick was being done. The monkey ran across the enclosure as Maximiliano made the leaf reappear in the palm of his hands. As this was repeated a couple times the monkey then put his hands over his mouth showing how mind blowing this was to him. As the trick was coming to an end it appears that the monkey went back into his cage to get his friends so that they can see the trick as well. But Maximiliano and his friends left before the rest of the monkeys could see.

The video has gone viral and has over two million views on Tik Tok and a few hundred thousand on youtube. It is crazy how much comprehension monkeys have and how smart they are.