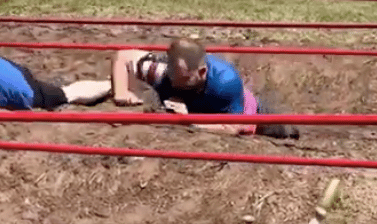 On his way to work in 2018, Roman Leykin, 36, had an epileptic seizure and fell down the New York subway rails.

A train struck him, causing him to lose both of his legs above the knee and injure his brain.

But in the sweltering heat of Wallingford, Connecticut, he ran the Gauntlet in almost three hours.

From Stamford, Connecticut, a former software developer named Roman said: “The day of the gauntlet started off with the heat blistering.

“The race started more or less immediately and went right to D-Day, a mud crawl, and then a walk, and then a climb over the Stairway to Heaven, and more walking, and more sun.”

His prosthesis kept falling off, which made the sun and heat much more difficult and slowed down his pace.

He said, “It was so hot, my prosthetics kept coming off, so I would have to stop and put my legs on again, and walk a few steps, and go down, and put them back on again.

Crossing the finishing line, I felt triumphant and exhilarating, since I did it under my own power and walked by myself with no assistance from my teammates.”

Roman has fought a long and tremendously difficult struggle in his recuperation up until the point of finishing the course.

He stated, “My traumatic brain injury was what kept me in inpatient care for a little over a year and two different clinics. That was a lot of relearning how to communicate: read, write, speak.

Learning how to better use my prosthetic legs in walking more naturally has been an ongoing process. It started in January 2021 when I committed to using ‘shorties’ and no wheelchair,” he continued, referencing to the earlier prosthesis that were shorter.

After the injury, Roman lost his ability to work and got completely absorbed in sports, taking up cycling, rock climbing, and now the obstacle course.

He said, “My friend Johnny Vaca introduced me to the Gaylord Specialty Healthcare clinic and I heard about the race on social media and I immediately signed up.

I figured if I can get through a lot of the obstacles in the race, obstacles in real life will be a piece of cake.”

Roman obtained assistance from his colleagues at the Hanger Clinic, a prosthetics and orthotics business he works with, to carry out the course on June 25.

He encountered unanticipated challenges and had to evade some of the race’s hurdles, but he persisted and made it to the finish line.

This wasn’t a simple task. Roman was aware that the race would demand a huge amount of dedication, both on race day and in the lead-up.

He said, “I did because most people have no idea what can be accomplished in my prosthetics with some hard work, dedication and relentless practice. I spent probably 90 hours preparing. The race itself lasted from 10:20 A.M. from my timeslot to when I ended, sometime in the early afternoon.

I started going consistently to the gym and doing strength training exercises I knew would be beneficial in the gauntlet in March. I did different and unique bilateral above knee amputee exercises at the gym utilizing all equipment available to me and wore my prosthetic tech legs all day, every day.

I also walked in my prosthetics in Central Park, specifically around the reservoir since it has uneven rocky terrain.”

The event served as a fundraiser for the Gaylord Specialty Healthcare facility, but for some of the participants, like Roman, it means much more.

“It has only strengthened my resolve to achieve greater things in life both physically and mentally,” he stated.

“I thought I had what it takes to take on all the obstacles. Not yet. So now I have another reason to keep it going. Relentless forward positive momentum. Bring it on!”