GladWire
Awesome Couple Wins Millions But What They Are Doing With It Is Astonishing,... 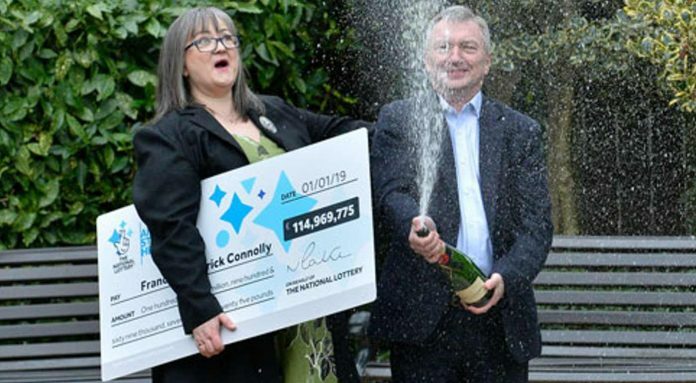 A self-described charity addict won over $145 million in the lottery, allowing her to overdose on her acknowledged addiction.

Frances Connelly, who has made headlines across the UK and Ireland, has already given away $74 million with her husband, “Patty” Patrick, who purchased the winning lottery ticket. “Helping people, it just gives you a buzz.” “I’m addicted to it now,” Connelly, 55, said in an interview.

Connelly has been assisting others since he was a child. As a child, she volunteered with St. John’s Ambulance, and as a student in Belfast, she established an AIDS helpline. She is the founder of several community organizations that help refugees and provide seniors with tablets so they can video call their families.

Winning the EuroMillions 2019 jackpot inspired her to help others, so she used the money to establish two professional charities right away.

“So when we first sat down with our cup of tea Patty said, ‘go on then, make your list,’” Connelly stated. Connelly explained. She stated that most of the large sums of money have already been distributed, and that she has received a “yearly charity budget” from her husband, who still works at his plastics company, though she has already spent her way up to the allocation for 2032.

She wasn’t overwhelmed, but rather remembered all the conversations she’d had over the years about what she’d do if she won the lottery; the hierarchy of helping was well established.

Regarding personal treats, they did purchase a new house—a six-bedroom home on seven acres of land in Durham.

“I’ve never actually had to come to terms with all that money because we’ve had it for such a short amount of time,” she states, adding that the majority of it has already been divided among her large family, donated to charity, or stored somewhere safe.

“If I had any advice for a winner… I’d say money liberates you to be the person that you want to be.” She also reported on her winnings. “If you’re stupid before you get it, you’re going to be stupid afterwards.”