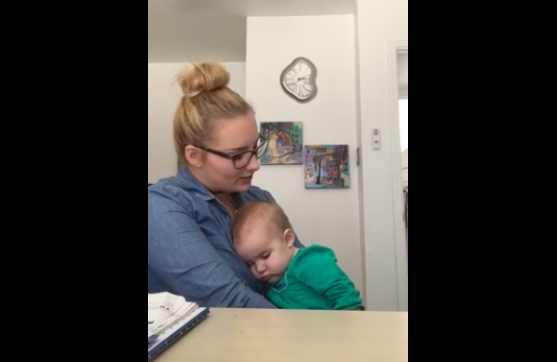 It is adorable when a baby is shown doing something in a video and you just can’t help but smile. According to Science ABC, “There are actually some traits that babies possess that automatically trigger our brains into feeling a sense of joy. According to an Austrian ethologist, the cuteness traits include a large, rounded head, big eyes and a few others.” Babies are adorable and when this mother sang a song to her baby girl, she fell asleep to her mothers beautiful voice.

In this video we see a cute little girl that was wide awake bouncing to the beat of the piano as soon as it started to play. According to Tiny Love, “Babies just love songs, rhythms and music and, like children and adults, greatly benefit from a musical environment. However, scientists have found that the effect music has on the young minds of babies is far more significant that one would imagine.” Recent scientific studies show that music has a great impact on a baby’s physical and mental health.

This mother started to sing to her baby with a piano playing in the background. The baby started to dance but soon grew tired and laid against her mother. Listening to her mothers music, she began to fall asleep. As her mother was singing on and on, she lifted her baby girl up to her shoulder so that the baby could be in a more comfortable sleeping position. The adorable little baby girl finally fell asleep on her mothers shoulder.

This is an amazing example of the dear love from a mother to her daughter. The bond between a mother and daughter will never grow old and will always be a part of both of them.