GladWire
Animals Women Seal-Watching Notice One Different From Others. After Seeing Why, They Rush... 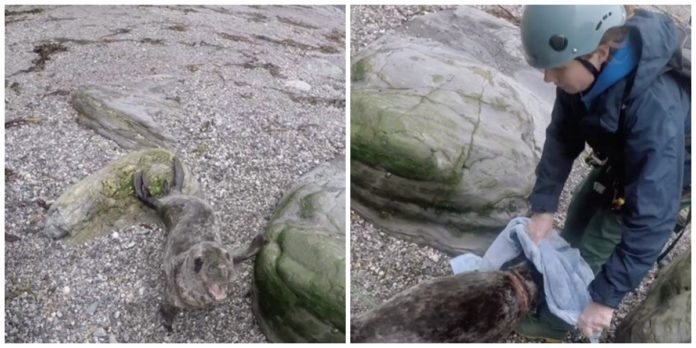 Sea creatures are among the most interesting animals to be on this earth. And to many people, they are extremely fascinating. But the same can be said for land animals as well. But what about those ones that are both?

Every day is a chance to learn or experience something new. And these two researchers were doing just that. They had been observing a group of seals while on a beach, when they noticed that one of these adorable babies wasn’t acting right.

After looking closer, they could tell that this seal was lying away from his group, and had netting stuck around his neck.

They knew that without any help, this seal wouldn’t live to see another day. But they also knew they couldn’t rescue the poor baby on their own. So instead, the two woman who are apart of the Cornwall Seal Group Research Trust, called the British Divers Marine Life Rescue and the Cornish Seal Sanctuary for help. And luckily, both sent people to go help.

They spent hours assembling the team and coming up with a game plan on how to save the seal without harming him, and without scaring the others away.

So they decided the best way would to be for them to get down there without him noticing, and then they ran to him at last second before he could act.

“He was very feisty when we caught him, so we used a towel over the head and around the jaw to stop him from biting, and also to cover his eyes to help calm him, so that we had full safe control of the animal while we cut the net away,” said Dan Jarvis from the British Divers Marine Life Rescue.

They quickly got to work to get the poor baby free from the netting. As they were doing so, they realized just how young this baby is. They determined him to be only 9 months old. And they also got to see just how deep this netting was. If it had been left on any longer, it would have become increasingly more painful. 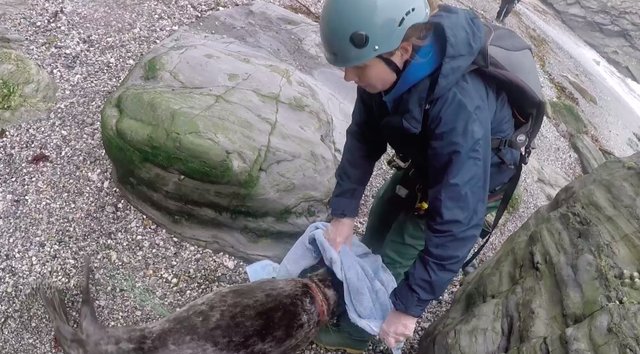 “The net had been pulled in tight across the back of the neck and had caused a fairly significant injury; this often happens as when the seal is hauling across the beach, the trailing part of the net will catch under the body and flippers and be pulled tight with every movement it makes. Essentially it acts like a saw going back and forth and digging into its new to cause the wound. The added weight and drag of the net when it is swimming would make it harder for it to hunt efficiently. There is also the small chance that it could get snagged on something underwater and drown,” said Darvis.

But this seal got lucky! If these two women hadn’t seen him, who knows how much longer this poor baby would have had! We are so thankful that he was rescued, and then released back into the water.

Weeks later, the members returned back to the beach and were able to spot the same baby seal, happily sleeping on the sand. It was a beautiful sight to see, just knowing their hard work paid off.

If you are thankful that these rescuers were able to save this baby, and that he is now enjoying his life, SHARE this post!

Article via The Dodo