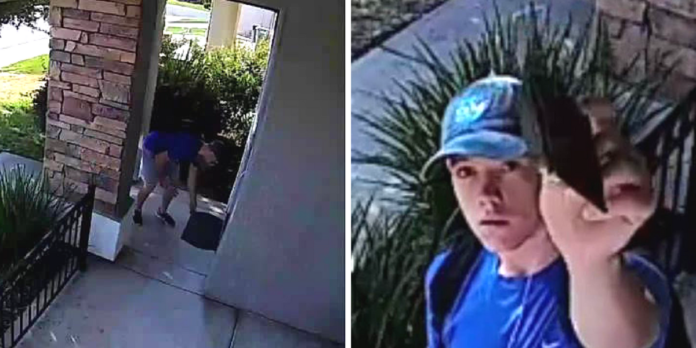 It’s sad that I didn’t trust him to open my door when he was just doing a good deed,” Melissa Vang wrote. “We hear so many terrible news and barely any good. His act of kindness cannot go unrecognized.”

Tyler Opdyke is being recognized for being a great and honest person, and this woman is being sure that his good deed does not go unrecognized. Melissa was home with her children in the living room when she heard a knock at the door. She was immediately skeptical of the knocks and was sure to keep away from the front door in fear of someone trying to trick her.

Tyler Opdyke was walking from house to house, handing out fliers for a pest control company that he was working part-time at. He was walking from mailbox to mailbox when something in the driveway caught his eye. A small black wallet that was loaded with cash was sitting where a car had once been. Tyler walked to the wallet and went straight to the door.

He spent a few minutes knocking on the door, confused as to why no one would answer because he had heard children playing inside. “I was knocking on the door for a minute or two,” Tyler said “I actually heard her little girls and was wondering, ‘Why is nobody answering?’ I’m like, ‘How can I find some way to let them know that I have this? I was like, ‘Perfect! Here’s a camera right there.’”

Turning to the camera, Tyler held the loaded wallet close to the lens as if to show that he was there for a reason. He then placed the wallet clearly in view on the porch and walked away. When the knocking had ceased, and things had returned to normal, Melissa checks the tapes on her camera and was shocked by what she saw. The boy had saved the wallet from being stolen and was very generous in what he had done.

“It’s sad that I didn’t trust him to open my door when he was just doing a good deed,” she wrote. “We hear so many terrible news and barely any good. His act of kindness cannot go unrecognized.”

Melissa posted on Facebook about the event and later was reunited with Tyler, thanking him for what he had done. She also gave him a 150$ reward. We are so proud of Tyler for doing the right thing and restoring our faith in the communities we live in. With good people like Tyler in our community, we can forge on and be the great people that we are meant to be.

If you’re thankful that there are still good people in this world, SHARE this story with your loved ones and check out another good video, below.