GladWire
Animals Watch: Woman Was Trapped By A Coyote But Then Her Little Terrier... 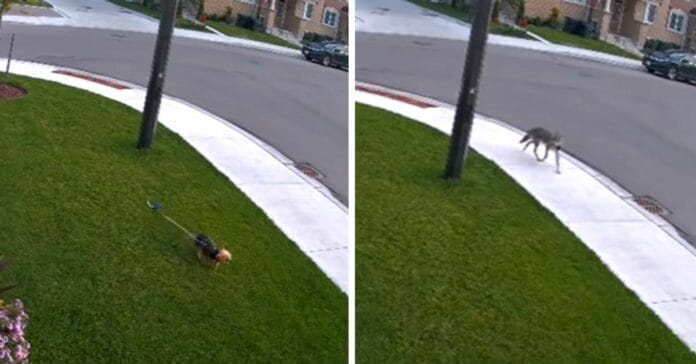 Dogs can be described in many different ways by their owners. The most common word that describes our dogs is a companion. After all, dogs are with us through every high and low, and they are always going to be part of our daily lives.

We also could use the words “loyalty, love, or even happiness.”

With the use of all these words have you ever considered calling your dog a hero? They never are born to be heroes but sometimes they do the unexpected and save the day. That’s exactly what a Yorkshire Terrier did for its family

This Terrier named Macy may be a small dog but on the inside, she thinks she is huge. She is a “roaring lion.”

She proved herself when she was outside with her human sister, 10-year-old Lily. The two were walking around their neighborhood in Ontario, Canada when something they weren’t expecting happened.

As they were taking the walk, a coyote appeared and started chasing them down the sidewalk. As the little girl ran she had little hope of getting away from the coyote. This is where Macy proved herself a hero.

Macy didn’t care that she was only 10 pounds. She stood up to the coyote and started acting crazy. She was barking and dodging and weaving, trying to frighten the coyote to go away. Lily started screaming and yelling for someone to help, but Macy already had it covered.