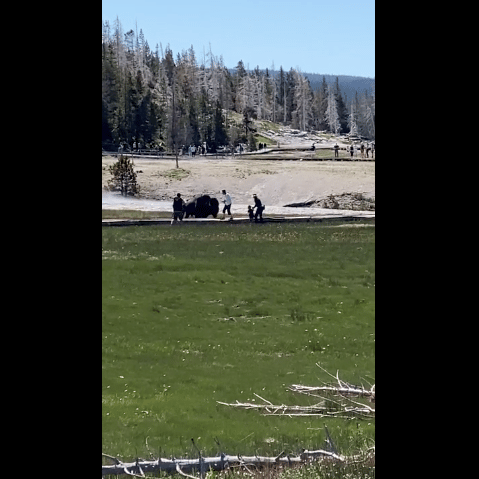 Along with the distinctive flora and wildlife found in Yellowstone are the unfortunate people who make poor choices and end up having close encounters with the area’s wild residents.

The bison are among the animals in the park that get the most attention, either due to their size or appearance of docility. Although bears are also common, humans appear to dread them slightly more than bison.

An online video that was recently published by a recent park visitor and has since gone viral depicts what looks to be a family getting a bit too close to nature and paying a steep price.

The video, which was first shared on Reddit, appears to show an elderly couple strolling with a little kid and a man who is allegedly the boy’s father. The gang approaches a bison that is resting along one of the boardwalks way too closely.

The big animal originally waved its tail, swung its head, and generally tried to warn the visitors to back off, but they continued to slowly approach it, according to the individual who submitted the video.

By the time the video begins, the bison has had enough and moves closer to the family while leaving a dust trail in its wake.

It pauses when it gets close to the elder couple and youngster, then charges towards the boy who is running away from the others. The bison is close behind him, but just as it is about to approach them, the guy grabs the infant in his arms.

The guy is then thrown through the air by the bison when it catches him with one of its horns. The man’s arm hangs loosely, but the kid appears uninjured. Due to the goring, he needed to be brought to the hospital. 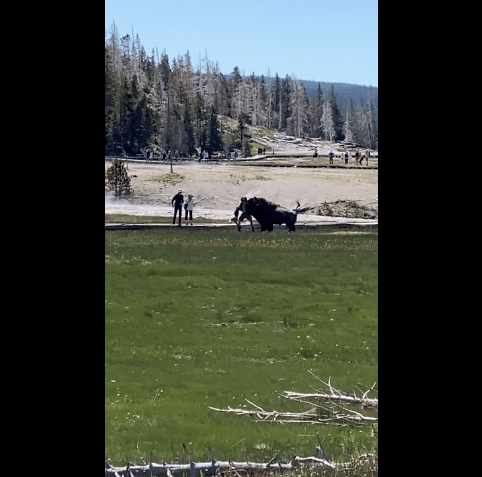 “I had been following the big guy for quite a while and I saw the whole situation unfold so I started recording,” the Reddit user commented. “What you don’t see is the beginning where the guy in the hat approaches way too close which is what started it all.”

“The guy who ends up getting pummeled was the first to get the bison riled up,” he continued in another comment. “The bison went after the older couple because the kid ran towards them. It was one big family. I think parents, kid, and grandparents.”

“Kid was ok, but dad had at least a dislocated shoulder.”

Georgia tourist Rob Goodell, who saw the confrontation, told the Cowboy State Daily that the family was unquestionably the offending party.

“Anyone who says that the bison just attacked that guy or whatever, that’s bulls***,” Goodell said. “The bison was just protecting his ground.”

After the incident, the National Park Service published a warning on how visitors should use common sense, respect the animals’ space, and pay attention to their body language while interacting with them in the wild.

“They say distance makes the heart grow fonder,” the Facebook post read. “Distance also keeps you grounded. (Like not flying through the air.) So remember, when it comes to being around wildlife, long distance = #RelationshipGoals.”

“Unfortunately, you may never get solid answers on why a fleeting relationship went south, but if that ends up being the case, you just have to take a deep breath, back away, and focus on keeping that safe distance until things cool down. And remember, there are always much easier ways to earn frequent flyer miles than by getting too close to a wild animal.”