GladWire
Animals Watch: Family Has A Crazy Encounter On Their Boat With A Real... 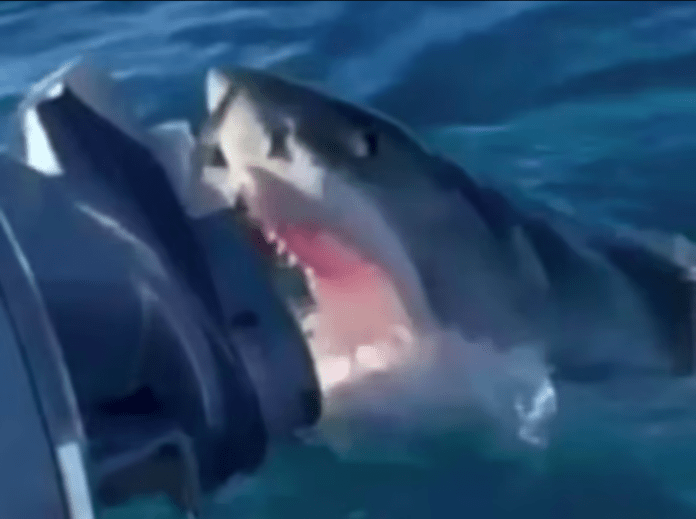 While out on a fishing trip with the family, a monster 13-foot shark attacks the boat. This makes for a long hour and a half.

Off the coast of Mandurah, David Tuckfield was out on a boat with his family fishing when his 14-year-old son saw a shark beneath the surface.

This 13-foot great white made its way straight for the small boat, opened his mouth, and chomped right into the outboard motor.

The shark continued this behavior by circling around for about an hour, giving the family a day never to forget.

”I had goosebumps, I’ve never seen one that big ever,” Mrs. Tuckfield told Nine News.

Shelby, their son, had been reeling in a fish at the time the shark showed itself on the surface.

Mr. Tuckfield said, ”You could feel the boat move a little bit when he hit it.”

The motor of the boat was left for wear along with the cage.

Even though Mrs. Tuckfield was screaming that the shark would smack the boat, it was the highlight of their Easter weekend.

Mr. Tuckfield said, ”We don’t appreciate them until you see them up close and it is their playground.”

According to Seeker, shark experts believe that great white sharks are attracted to electrical pulses in some boat motors.

Captain Scott Fitzgerald of Madfish Charters said, “I’ve been chartering for nine years, and I’ve never seen a shark try to attack my boat. It was very exciting for all of us. It really got our hearts beating hard.”

Fitzgerald said that the shark circled three times around the boat, each time striking the brand new motor.

Fitzgerald eventually left the area along with his shark-bitten motor.

With the fact that a metal motor could break a shark’s teeth, one has to wonder why they would bite into one in the first place.

South Carolina Aquarium Shark Expert Arnold Postell said, “Sharks have the ability to detect electromagnetic fields with their Ampullae of Lorenzini. These are ‘jelly’-filled pores at the tip of the nose/snout of elasmobranchs designed to pick up minute electric pulses put off by muscle contractions of their prey.”

Some motors give off electric pulses close to marine animals, confusing sharks.

The shark probably just tasted the motor to see if it was worth eating.