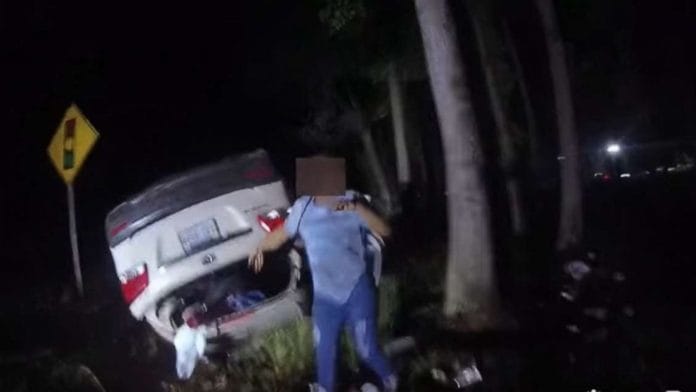 A Virginia police officer is being praised as a hero after body camera footage showed him single-handedly lift a car to rescue a woman pinned underneath.

“The driver was laying underneath the vehicle with her head pinned by the sunroof,” the Sheriff’s Office statement read. “Seeing the trauma her child was witnessing, Deputy J. Holt went into overdrive.”

Body camera footage shows Holt straining to slide the vehicle over. You can hear him say he can’t move the car and then something incredible happened.

“Through sheer will and determination due to fearing the female may succumb to her circumstance in front of her panic-stricken child, Deputy J. Holt took quick action and was able to physically lift the vehicle up enough for the driver to maneuver her head out to safety,” the police statement explained.

The incident happened on May 7 in Gloucester County, Virginia and the video was released by authorities on May 18.

The identity of the child was blurred from the video but a child can be seen inside the vehicle crying and begging the officer to help his mother.

The driver of the car, Channelle Parker, 50, is ok but she was charged with driving under the influence and hit and run for fleeing an accident before emergency officials arrive.

This isn’t the first time Deputy Holt has taken extraordinary action, just three months ago he saved two people from a burning house. For his heroism he was given the Top Cop Award for the regions of Virginia he serves.

“Deputy J. Holt recently accepted both the local and regional Top Cop Awards from the Greater Hampton Roads Regional Crime Line on February 2, 2021 for his commitment to public safety after saving the lives of 2 individuals from a burning house on the afternoon of March 24, 2020,” said the Gloucester County Sheriff’s Office.

You can watch the amazing rescue below: