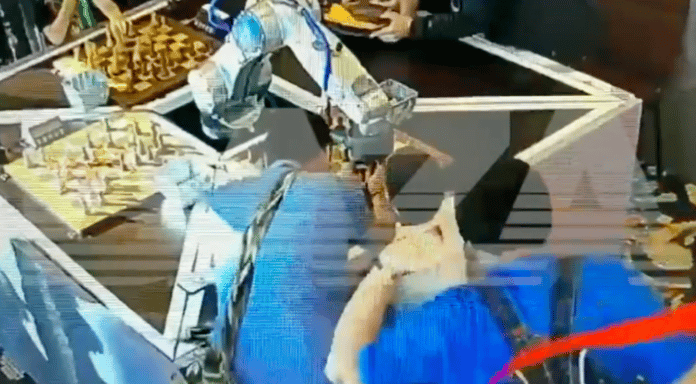 According to press sources, a chess-playing robot fractured a 7-year-old opponent’s finger last week during a match that was a part of the Moscow Open.

According to the U.K. Guardian, Sergey Lazarev, head of the Moscow Chess Federation, informed the Russian news agency TASS that “the robot broke the child’s finger.”

He stated, “This is, of course, bad,” because the robots have played many other rivals without incident.

The robot held the boy’s finger in its hold for many seconds before adjacent adults realized there was an issue, according to a video of the event from Tuesday. They hurriedly removed the youngster from the robot as they saw what was happening.

According to the Guardian, the robot appears to have been activated when it grabbed one of the boy’s pieces, according to Sergey Smagin, vice president of the Russian Chess Federation, who spoke to the Baza Telegram channel.

He claimed that the youngster looked to be moving too rapidly.

“There are certain safety rules and the child, apparently, violated them. When he made his move, he did not realize he first had to wait,” Smagin said, according to The Guardian.

“This is an extremely rare case, the first I can recall.”

Baza referred to the youngster simply as “Christopher” and said that, among children under the age of nine, he was one of Moscow’s top chess players.

Lazarev said the boy “made a move, and after that, we need to give time for the robot to answer, but the boy hurried and the robot grabbed him,” according to The Guardian.

According to Lazarev, the youngster appeared unfazed.

“The child played the very next day, finished the tournament, and volunteers helped to record the moves,” he told TASS, according to The Guardian.

According to The Guardian, the boy’s parents have apparently been in touch with the public defender’s office.

“We will communicate, figure it out and try to help in any way we can,” Lazarev said.

The occurrence was “a coincidence,” Smagin reportedly told the state-run news organization RIA Novosti, and the robot was “absolutely safe.”

“It has performed at many opens. Apparently, children need to be warned. It happens,” he said.

Russian grandmaster Sergey Karjakin said the accident was due to “some kind of software error or something.”

“This has never happened before,” he said, according to The Guardian. “There are such accidents. I wish the boy good health.”