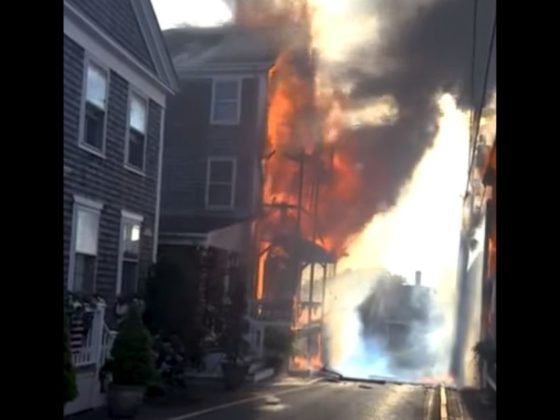 Capt. Nate Barber of the Nantucket Fire Department was taking advantage of a day off on Saturday by taking his wife for a trip across the sleepy Massachusetts island town so they could have some coffee.

He noticed smoke as they were moving. Whether on or off duty, Barber was still a firefighter, therefore he set aside any plans to brew a cup of coffee and sprinted to the scene of the incident.

“I started running toward it,” he told WCVB-TV in Boston. “I think I ran for about two blocks, and I came around the corner and realized it was the hotel that was on fire.”

The Veranda House was “the hotel.” The historic inn has fire extinguishers and alarms, but it was constructed before sprinkler systems were mandated, making it a tinderbox, according to a news release from the fire department.

Barber arrived at the building and went straight inside to look for people.

“I went into the hallway, and the hallway was filled with smoke, and I heard somebody, and I yelled for them, and I was able to find two people in a dark staircase in that hallway,” he said.

They were able to flee through a window when he led them there. Additionally, he ran upon Peter Georgantas, a kind soul who had also seen the fire and sprinted to assist.

For those trying to escape onto the roof, Georgantas had discovered a ladder and pushed it up against the structure so they could descend safely.

“I grabbed the ladder put it up to the top of the porch, went up, and helped some people get off the roof,” he told WCVB. 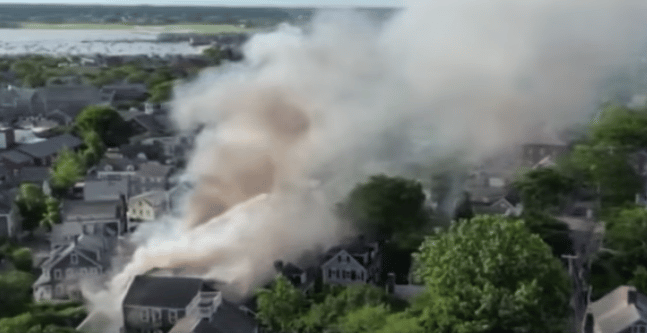 Barber and Georgantas returned to the blazing structure to seek for more persons who needed assistance after the two had safely descended from the roof.

Everyone managed to escape the inn alive thanks to their efforts and those of the attending fire departments, however, Barber had to spend the night in the hospital due to heat exhaustion and smoke inhalation as a result of his spontaneous bravery.

Three other firefighters had to visit the hospital as well, but they were all released the same day.

Before it was put out, the fire spread to two adjoining buildings, and all three were completely destroyed.

“The fire did extend to two buildings close to the original fire building,” the news release stated. “Damage to all the structures involved is extensive with all of the buildings involved in fire being total losses. There is no estimated costs of damage at this time.”

However, things could have gone a lot worse.

The fire, according to Barber, was perhaps the largest he had ever seen. He is certain that the fire might have completely destroyed the town and is really pleased with how everyone worked together to put out the fire that day, saving not just lives but also livelihoods.

“I think this fire could’ve burned the town down,” he said. “The Nantucket Fire Department, which has limited resources and only about 20 active, you know, career firefighters that respond to fires regularly, were able to stop the whole town from burning down.”

Additionally helping out, neighbors brought food and drink for the firemen. The 10 persons who were displaced by the large fire were housed at other neighborhood partner motels.

“I would like to further state the heroic efforts of several community members including Patrick Marks, Jim McIntosh and off-duty Captain Nathan Barber (and I am sure I may be missing some names) saved lives on Saturday,” the news release continued. “They all entered into life-threatening conditions in order to warn, rescue and remove people within the building. Their bravery will not go unnoticed. Also, the dedication and resolve of the Town’s firefighters to respond from home to combat the large-scale fire is not unusual but will again be recognized. Lastly to all the outpouring of water, Gatorade, food, and thoughts from the community. The Department members THANK YOU.”

You can see the unbelievable fire here: