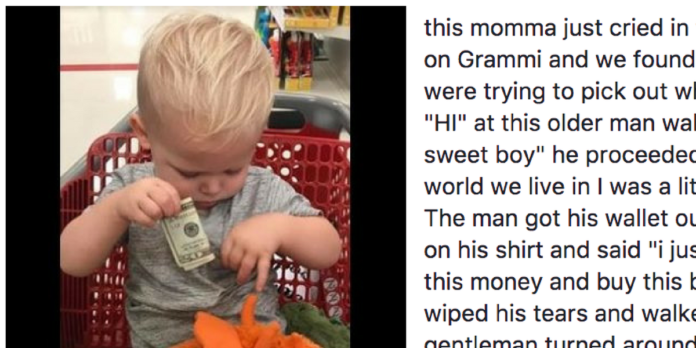 Through one generous and kindhearted action, an Oklahoma man restored faith in humanity not just for a grateful mother and her son but for the rest of us as well.

Alyssa Hacker and her young son Owen were shopping in Target when Owen grabbed three stuffed dinosaurs. Hacker knew Owen could only choose one to buy and take home. As they stood there, making the tough decision of which of the three toys would be the lucky winner, Owen randomly but excitedly yelled “HI!” at a stranger walking by.

The man responded to the cheerful greeting saying, “Hey sweet boy!” The kind stranger walked over to the cart and started interacting with little Owen. They played with the dinosaurs and chatted for a little.

Alyssa admitted that due to the current culture she was a little hesitant with the interest this man took in Owen, but her fears were soon settled after this man’s simple yet profound action.

After the mini-playdate, the man pulled a twenty dollar bill out of his pocket and handed it to Owen. He turned to Hacker and said “‘I just lost my 2-year-old grandson last week. You take this money and buy this boy all three dinosaurs.’ [He] rubbed Owen’s back, wiped his tears, and walked off.”

Owen didn’t miss a beat and quickly shouted, “THANK YOU!” Hacker shared in the social media post, “the gentleman turned around and yelled boomer sooner,” and walked off.

Hacker was stunned. This encounter is definitely one you can’t ever forget. She shared that the random act of kindness caused her to cry right there in the middle of Target. “There is still some good in the world,” she exclaimed.

Despite his hurting and grieving, that man chose to bless a family with one simple random act of kindness. Maybe we can all learn a little something from the stranger in Target. It doesn’t have to be extravagant money or gifts. A random act of kindness takes many forms and could be something as small as a smile and a “hello.” You never know, you might have just made someone’s day. 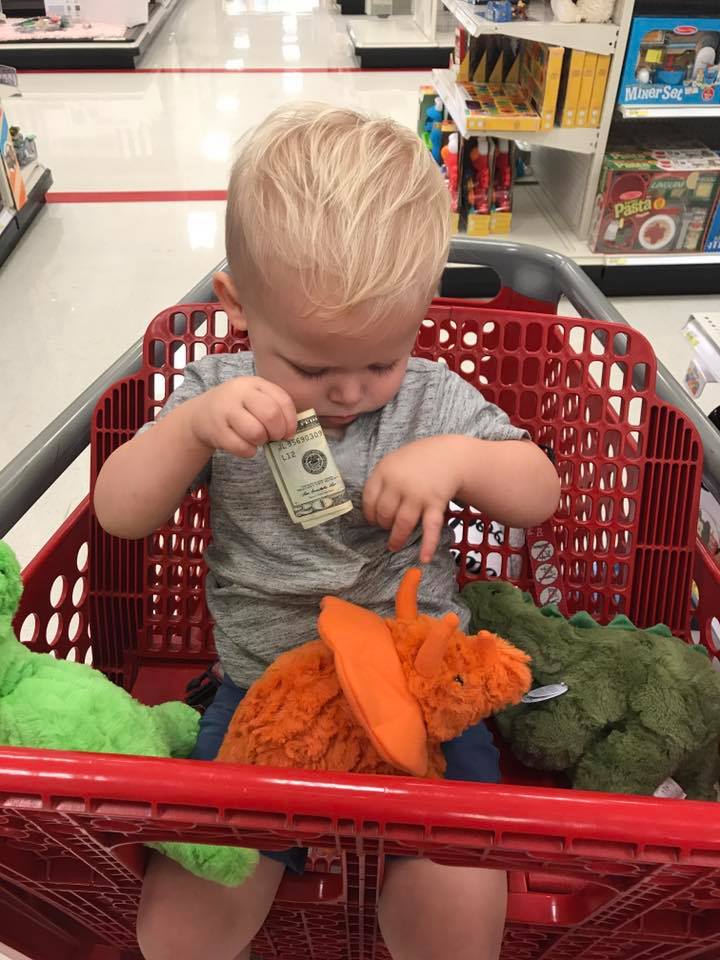 “This momma just cried in the middle of Target. We were at target waiting on Grammi and we found some dinosaurs. Owen grabbed all 3 and we were trying to pick out which one he wanted when Owen abruptly yelled “HI” at this older man walking past us. He turned around and said “hey sweet boy” he proceeded to play dinosaurs with Owen and with this crazy world we live in I was a little hesitant as too how close he was with Owen. The man got his wallet out and pulled a $20 out, he put it in Owens pocket on his shirt and said “i just lost my 2 year old grandson last week. You take this money and buy this boy all three dinosaurs” and rubbed Owens back, wiped his tears and walked off. After Owen yelled “thank you” the gentleman turned around and yelled boomer sooner! There is still some good in this world 😭”

If you were touched by this stranger’s generosity, please SHARE with a friend!

Check out these other random act’s of kindness in the video below.