GladWire
Awesome A Selfless Act & An Amazing Tip Turns Into A Real Life... 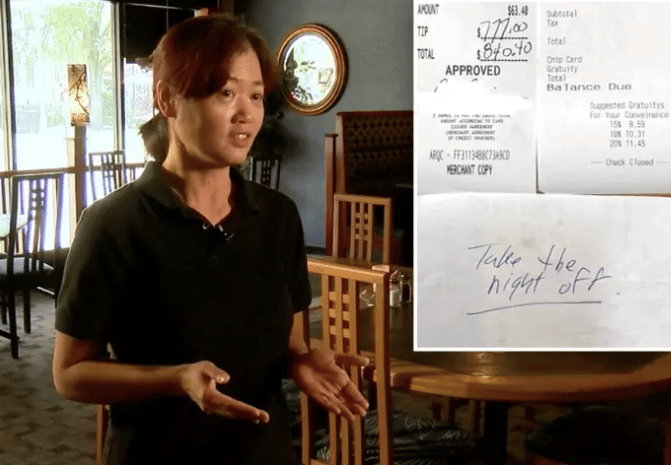 Her prayers were clearly heard.

On a meager $63 bill, a New Orleans waitress was tipped a stunning $777, along with a note that said, “Take the night off.”

Ava Guan, a server at Hoshun Restaurant, was working on the weekend when she was served by Abdul Hamideh, a 31-year-old franchise owner of IHOP and Popeyes restaurants, who showed her kindness.

But, as thankful as she was, Ava Guan gave the entire amount to her church, Olive Church in Jefferson Parish, to which she had already given $300 the day before. They were in severe need of a new air conditioner, which was a significant financial expenditure.

Guan said she had prayed for a miracle and that the church would find a way to raise the funds. Then came Hamideh, who had a large wallet with him.

“I think everybody needs an angel,” Guan said. “I think God listens and will help you.”

According to WDSU6 News, Hamideh intended to bless someone with a nice gesture that day, oblivious to the fact that the number 777 is a lucky number for him and that it is also a spiritual number. He told NOLA.com that he was simply “happy to help a neighbor.”

“I can’t believe,” said Guan, who at first thought the tip was a mistake. “I think it was God [who] gave me the gift.”

The high roller’s tip also surprised Alice Ho, the restaurant’s owner, and manager, who said it caused her “goosebumps.”

“She told me she prayed that day and it came true. That means somebody listened. Someone listened,” Ho said of Guan.

Olive Church also got $1,000 in donations from Guan, thanks to the kindness of a complete stranger.

“I always think about the bright side. Always bright stuff,” Ho said. “I still believe everyone [has a] good heart. People helping people. Really. I mean it. Even in New Orleans.”