GladWire
Animals Rescuers Find 100 Dogs In Warehouse After Receiving Call That Left Them... 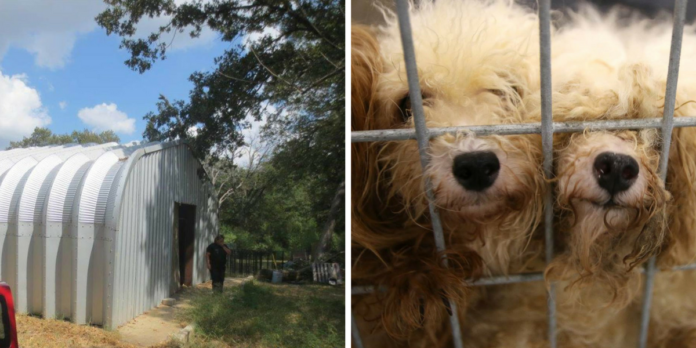 Can you imagine living your life trapped in a small cage in a disgusting room? No windows, no affection, absolute filth, and no end in sight.

Unfortunately, this is the lifestyle of various dogs living in puppy mills across the world!

This is what happens when people decide to look at animals as a way to make a profit and do not care for their hygiene or well being.

One puppy mill, in particular, was discovered in Northern Texas just this past September. They were selling puppies for between $700-$1200.

Some might ask why all breeders aren’t looked at in the same light. However, to be a commercial breeder you have to hold yourself to certain standards for living conditions and care that the animals receive while in your care.

It is easy to see why there are so many laws for animal cruelty when you see the conditions of animals in puppy mills.

The dogs in Texas were kept in small, filthy cages in a living area that was not well maintained. Their hair was matted and it was pretty clear they had never been bathed. The animals were in poor health and never taken to the veterinarian as well.

The incredibly strong smell of urine and feces was enough to make investigators want to throw up as they entered the room!

The room itself was small and was without ventilation while the animals in their small cages were packed in close together.

They had everything from Shih Tzus and Pomeranians, to Maltioos and Yorkies. That is just an idea of a handful of the breeds kept there.

They were all rescued in a joint effort between the ASPCA of Texas and the Hunt County Sheriffs Office.

The owners of the animals surrendered all legal custody to over a hundred dogs, as well as two cats, at the end of September in 2016.

The dogs are finally receiving medical care and the missing affection that they were cruelly withheld from for the length of their stay with these heartless breeders. They are an example the reason why such strict animal cruelty laws are put in place.

Unfortunately, these laws are not exactly enforced strongly enough to keep this from happening at all. Over 10,000 puppy mills exist all across the United States and it is suspected that they product somewhere around two million puppies each year. Talk about a big problem!

There are some sure signs of a puppy mill if you look for it. Some of those signs can be when a breeder won’t allow you to see the mother of the puppy or the living space she was kept in.

As well as if they are being sold online. A good breeder would want to know what kind of person you are, where you live, and whether you would be a good owner for the dog you would be adopting.

This is a huge reason many people stress the phrase “adopt, don’t shop.” Because if you are seeking a purebred of a specific type of animal they know that there is profit to be made by breeding that type of dog.

This doesn’t mean you aren’t allowed to love a certain type of dog, but always research where the dog is coming from!

“The best way to add a four-legged friend to your family is to adopt from a shelter or a rescue group.”

In the end, these dogs were saved, cared for and will be put in rescue shelters where they will be able to go on and find loving homes.

After everything they have been through this is a miracle! This is really like a fairytale ending for a poor bunch of animals that truly deserve it!

If you were touched by this incredible rescue effort feel free to SHARE!