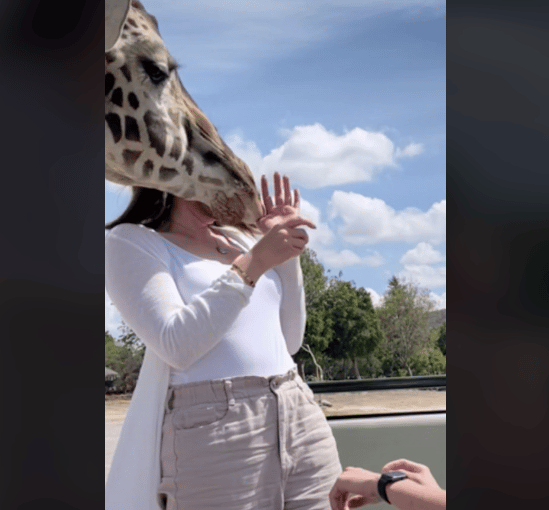 A lady was headbutted by a giraffe in a viral video posted on social media after her boyfriend proposed to her.

In a video she shared on TikTok on Wednesday, Montserrat Cox’s boyfriend proposed to her as they were feeding giraffes at a safari park.

One of the giraffes the two had been feeding nudges Cox’s elbow as he pulls out the ring to put it on her finger.

Then the giraffe headbutted her on the video.

“Had to wear a neck brace for the next few days, but still the best proposal ever,” Cox wrote.

@montserratcox Had to wear a neck brace for the next few days, but still the best proposal ever 💍 #engagement #fail #proposal #proposalfail #safari #giraffe ♬ Oh no, oh no, oh no, no no – Hip Hop

A subsequent video showed Cox’s neck swinging back before she recovered her equilibrium with her future husband’s assistance, who then hugged and kissed her.

The giraffe headbutt video garnered more than 374,000 likes and over 4,700 shares as of Monday. There have been around 3.6 million views of the video.

“Giraffe was like: you can do the ring part, but [I] ’m doing the kissing part,” one user commented.

“She was like ‘GIRL LET ME SEE THE RING!!’ Bridesmaid perhaps,” another user wrote of the giraffe.

“I think the Giraffe wanted your man and was trying to take you out,” someone joked.

Another user wrote, “If I don’t get knocked out by a giraffe during a proposal I don’t want it.”

Some others believed the giraffe’s gesture to be an unlucky omen.

“I would have taken that as a sign to say no,” one user wrote.

Another commented, “I don’t know personally I would take that as a sign from above quite literally.”

“No friends; It’s not a sign of anything. We have been very happy together for 7 years,” Cox wrote in response to such comments.

“The giraffe was just being a giraffe,” she said.