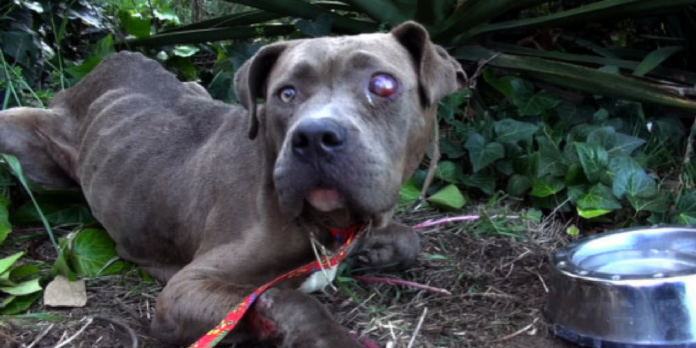 This poor dog was neglected and left to die. She was found half blind and seemed as though she was starving to death, but a group of local good warmhearted citizens looked past her appearance and gave the dog hope again.

Now because of these special people, the brave pit bull now has a chance at a new life.

Eldad Hagar, co-founder of an animal rescue organization called Hope of Paws, and his team of rescuers found Savannah in a park in the Los Angeles area.

When they found her, she looked as though she had been there for weeks.

“People tend to abandon their animals in that park. It’s a pretty wild area, many coyotes are always around, and it is just a horrible thing that people do, thinking the dogs can somehow survive on their own,” Hagar said.

Hagar shares that Savannah was in terrible shape when they found her. One of her eyes was covered in puss and almost as if it was infected and you could tell she was badly injured.

She had wounds all over her frail body, and clearly she has not been fed in weeks… Her figure was fading away.

Hagar shared his experience in rescuing Savannah. “ Once I approached the bushes where she was hiding, I realized that she had no more fight in her. She was so hungry, so tired.”

He then stated, “The process of starvation is horrible. The body first breaks down all the fat for energy, then the muscles, then internal organs…its a slow, and very painful death.

The team worked diligently, but hard, for two hours to bring Savannah out of her hiding spot. She seemed afraid of humans, and was acting as though she did not want to be saved.

But after a 2 hour stand off with the pit bull, Hagar was able to convince the dog to come out of hiding, and she laid right in his arms.

Immediately the team took Savannah to the nearest veterinarian. The Vet looked closely at Savannah’s eye, and decided it needed to be removed as soon as possible.

A large tumor was also found behind one of Savannah’s ears. She quickly underwent surgery to have both the tumor, and her left eye removed.

After the surgeries, and a quick recovery, Savannah’s “sweet spirit came alive,”-Hagar shared. 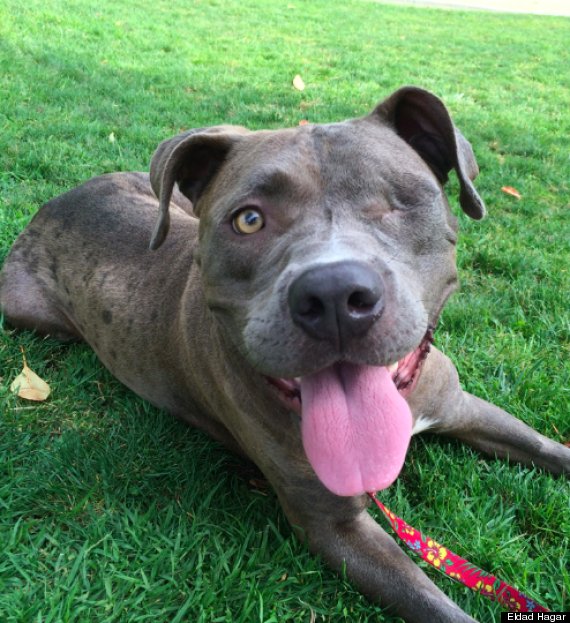 Savannah is now living with a foster family, but is looking for a forever home. Hope for Paws has many animals up for adoption, just like Savannah.

You can visit either of the websites for Hope for Paws or the dog rescue mission, Second Chance at Love, to view photos of the dogs they have given life and love too.

Please SHARE this story to spread the word in hopes that sweet Savannah will be adopted and given a forever home!!