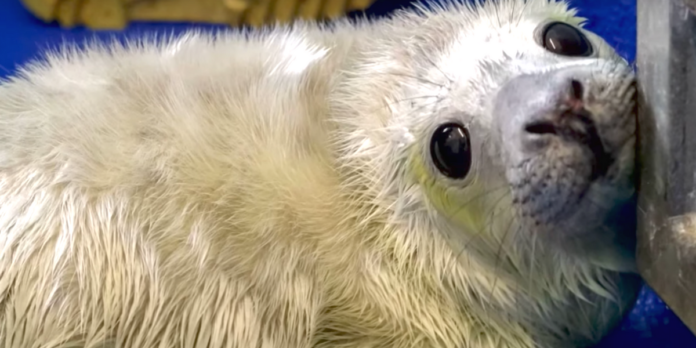 A newborn seal had a very interesting first day of life when it was abandoned by its mother on a rocky beach in the UK.

A local passerby spotted the frightened seal as it was crying for its mother at the bottom of a rocky cliff in Cornwall, England. The alarmed pedestrian notified several local conservation groups, including the Cornwall Seal Group Research Trust and British Divers Marine Life Rescue, asking for help with rescuing the day old pup.

Volunteers monitored the seal, who was later named Morwenna, from a distance for some time to make sure her mother wasn’t simply away looking for food. After several hours passed and the seal’s mother had not returned, rescuers determined that she had indeed been abandoned and the group prepared their rescue of the baby seal.

“We knew straight away that the pup needed rescuing and this might be our only chance to save its life,” Tamara Cooper of the Cornish Seal Sanctuary told reporters.

Using ropes to rappel down the cliff to the beach below, Cooper along with Sue Sayer from the Cornwall Seal Group gently approached Morwenna. Despite being frightened, the two conservationists noticed that the seal was uninjured.

“I was easily able to immobilize the seal with a towel and assess its condition,” said Cooper.

After gathering the frightened baby seal, rescuers then scaled back up the cliff with the pup in-tow and transported her to a local facility where marine specialists evaluated the
seal, declaring her healthy. It was at this facility that staff named the newborn pup Morwenna, after a character in the BBC One show Poldark.

For many young seals, the early days are the roughest. According to a National Oceanic and Atmospheric Administration (NOAA) report, baby seals are often abandoned by their mothers while searching for food. Alone, the young seals are vulnerable and susceptible to a whole host of predators as well as many different types of environmental dangers. Food shortages, as well as tourists who venture too close to seal families, can cause these young seals’ mothers to turn tail and abandon them permanently. Though their mothers usually return, there are times when newborn seals are left to totally fend for themselves.

If not for rescuers, Morwenna probably would not have lived a very long or pleasant life. However, in the care of the Seal Sanctuary located in Gweek, England, this pup will have the chance to live a normal seal’s life.

According to Cooper, Morwenna is being fed fish soup every four hours to ensure a healthy weight gain for a seal her age. Specialists will keep the young seal for several weeks, monitoring her condition until she is ready to be placed into outdoor nursing pools, where she will able to roam about and feed herself. When she matures and becomes acclimated to outdoor life, Morwenna will then be released back into the wild where she will live a happy and free life in the open oceans surrounding the British Isles.

If you’re glad that this newborn seal pup was rescued and is safe, please SHARE this video with friends and family and watch this seal rescue video below. Keep spreading positive messages!