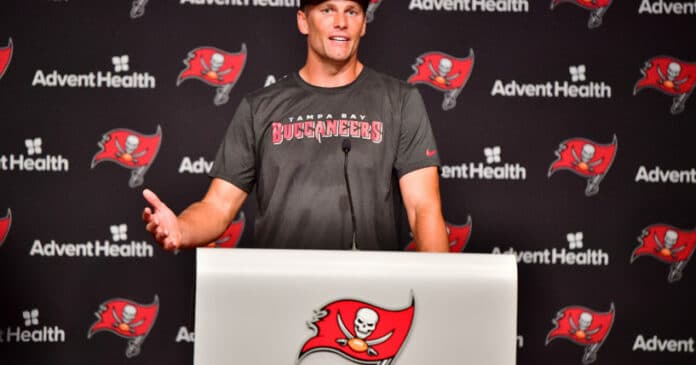 NFL great Tom Brady opened out on the difficulties he and his wife have as parents.

Money has turned out to be the most challenging aspect of parenting, according to Brady, who made this revelation on an episode of Ford CEO Jim Farley’s podcast “Drive.”

When asked how they keep their kids grounded, Brady responded, “It’s probably the hardest thing for us as parents, you know, with myself and my wife. My wife grew up in rural Brazil, the furthest state south, Rio Grande do Sul, very small kind of farming town, very simple girl.”

He continued, “I grew up in a, I would say middle-class family in California. My dad worked his ass off for our family. My mom stayed at home, took care of us kids.”

Brady explained how he “saw my mom work every day to make food for us at night and, you know, wash our clothes and know they supported us by coming to all our games and you know, it was amazing, you know, and then I look at my life with my family and it’s so fast.”

The NFL player continued by describing the lifestyle of his family.

He continued, “And it’s just, that’s my kids’ reality, which is the hard part to say, ‘Guys, this is not the way reality really is, you know?’”

Acknowledging there are still a lot of things he is learning as a parent, Brady added, “You just hope you can show them enough things to realize that when they are doing things that are selected for mom and dad to make our lives more convenient, that that is a treat.”

When he opted to terminate his 40-day retirement from the league in March, he garnered media attention.

In an interview with ESPN in April, Brady discussed the reasons for his decision to end his retirement.

“At the end of the day, I just love the competition on the field. And last year was a very bitter ending to a season and we’ve got to make a lot of corrections to try to improve and put ourselves in a better position to succeed moving forward,” Brady said.