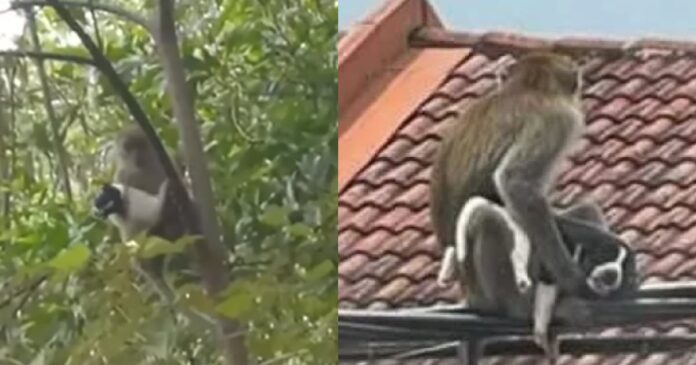 Puppies can bring the most joy to our lives. They are lovable, energetic, and can melt anyone’s heart.

There are actually prisons that help inmates by having them care for puppies.

Puppies can transform just about anyone for good.

As it turns out, humans are not the only ones who love adorable puppies. This one-week-old black and white puppy named Saru was kidnapped by a monkey and was carried to the top of an electric post.

This event took place in Taman Lestari Putra, Malaysia. Soon residents noticed the hostage situation and all gathered under the pole to see how they could rescue the puppy.

One of the onlookers, Cherry Lew Lee, said, “The puppy looked tired and weary but the monkey did not seem to hurt it. The monkey was just holding the puppy while it moved around.

It looked like it was treating the puppy as a friend or its baby, it was very strange.

However, we still needed to save the poor dog because it appeared to have been

Cherry and her neighbors tried to rescue Saru three times, but they were all unsuccessful.

The monkey would just carry the puppy through the electric lines in the tree.

Eventually, the puppy was able to be saved by throwing objects at the monkey to scare it off.

The monkey threw the puppy into a bush and retreated into the trees. 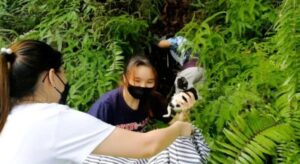 Everyone got Saru quickly before the monkey had another chance.

The puppy was thankfully not injured.

According to Cement Answers, monkeys kidnap dogs and the dogs grow up with the family. They feed them, sleep with them, and even get their fur pet cleaned by the momma monkey, which shows that the mom accepts the puppy as one of their own because the momma monkey only grooms her family members.