GladWire
Animals Man Hears Loud Noise While In The Woods, When He Gets Closer... 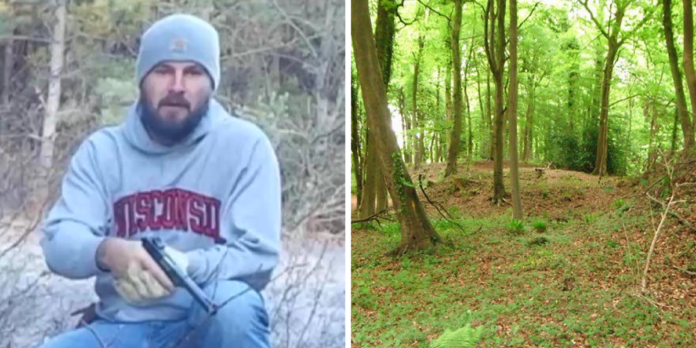 John Oens is from Wisconsin where he spends his free time hunting and trapping wild animals. This has been a longtime hobby of his for around 30 years. John has caught many wild animals, coyotes, bobcats, Canada lynx, and even a red fox.

The traps he was using are designed to catch small to medium-sized animals and are made without teeth, so when it’s used correctly it does not harm the animal.

When the trap is triggered, it holds the animal’s paw in place instead of puncturing its paw and the animal cannot be let free until a human release the trap.

One day on a chilly November morning, John went out into the woods with his father and a close friend to check his traps.

As he got closer to his traps he could hear a loud animal noise getting closer and closer as he made his way down.

Hoping to catch a coyote, John was shocked when he saw what his trap had caught. Although it was very similar to a coyote, this animal was much larger. It was a beautiful timber wolf. John never thought he would be staring straight into the eyes of a timber wolf.

Timber wolfs are usually shy and will steer clear of humans. It is very uncommon for a timber wolf to attack a human but it is not unheard of. It is illegal to hunt timber wolfs in Wisconsin.

The timber wolf is on the Federal Endangered Species list, meaning that the population of this wolf is very low. Hunting timber wolfs can give you up to $25,000 fine and up to 6 months in jail.

John knew he had to release this wild animal and let him go back into the wild to be free. But he faced one major problem. Although it’s not common for timber wolfs to attack a human, the animal is still wild.

If they feel threatened, they could easily attack and cause serious and possibly life-threatening injuries.

John’s father suggested using a large piece of plywood with a small notch cut out of the bottom. The plywood would create a barrier between John and the wolf and also allow the wolfs paw to fit through to the other side so John could free his paw without being harmed.

John very carefully placed the plywood in front of the wolf, and the wolf became frightened and starting biting the wood.

John remained patient and once the wolf settled down he was able to free his paw from the trap. The wolf did not hesitate and immediately took off and ran back into the wild.

What a scary but yet awesome experience it must have been for John to be able to be face to face with such a beautiful animal.

Thank you, John, for doing the right thing and setting the wolf free!

If you thought John’s experience with the wolf was breathtaking, please SHARE it with your friends so they can see it too!