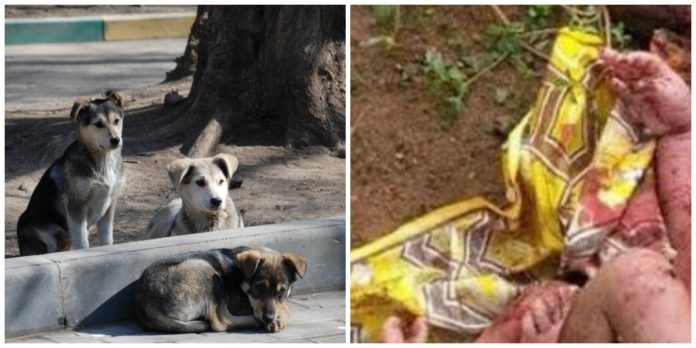 Everyone knows how loyal dogs can be. It seems to be a habit for them. And sometimes, it is that loyalty, that saves lives. Such as in this story.

Ulnas Chowdhury, a teacher at a local institution, had been taking a walk through the woods right by his house. He was enjoying the relaxation of the peaceful sounds of nature. But those sounds were soon disturbed by one noise that made his heart drop. He heard a baby crying.

Ulnas was used to the path he was taking, as he traveled that very route fairly often, so he wasn’t expecting to hear a child.

He then realized the sound was coming from the bushes. But as he got closer, he saw 4 dogs. Upon further investigation, he saw that these 4 dogs were protecting something. A baby girl, wrapped in a little pink blanket. It seemed like they had been watching out for her, and keeping her warm.

The dogs began barking and wagging their tails as if they were so glad that someone finally appeared to help the baby.

The dogs then sat right near the baby, and didn’t leave her side. He then went and gathered some neighbors. The one neighbor, Parveen Sen, picked up the baby and began to feed her some milk. Afterward, the baby stopped crying.

They all then began to walk back to Ulna’s home, and they waited there until the police arrived. And the dogs followed, refusing to leave her side.

These dogs felt the need to protect the baby, even after she was handed over to the police, they still seemed concerned for her well-being. Everyone was pretty surprised at how they 4 loyal dogs had reacted. And I’m pretty impressed, to say the least.

All we know is that the baby is now in good hands. We are so glad she was found before it was too late, and even more thankful that these dogs had been looking out for her!

If you are so thankful for these loyal dogs, and wish the best for the little baby girl, SHARE this post!