GladWire
Bad To Great Her Husband Was Lost In A Coma But Then He Said Two... 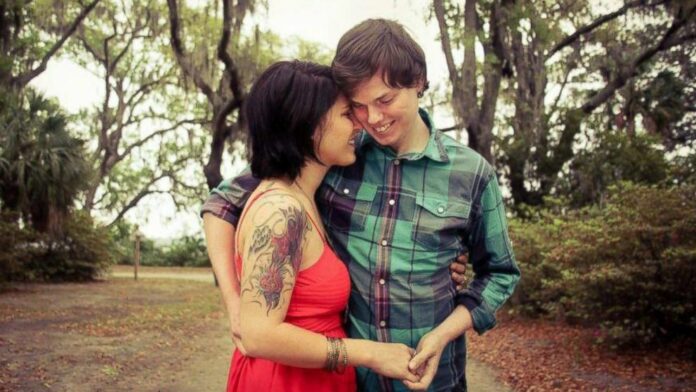 This couple had only been married for seven months when a motorcycle accident left Danielle Josey Davis’ husband in a coma and on life support.

Doctors told her to let her husband, Matt Davis, die and take him off of life support because there was a 90 percent chance of him not surviving the fatal accident.

Danielle told ABC News that it just wasn’t time yet. Then out of the blue, three months later he woke up and said faintly, “I’m trying.”

Though Matt Davis said that he doesn’t remember anything before the crash in 2010, he told ABC News, “I’m sure glad I married her.”

Danielle was 24 and Matt was 23 when the incident happened. They had only been dating for two months before their wedding.

Matt’s father had died around two years before the incident and his mother was too ill to take care of him. But Danielle made the decision to keep him on life support in hope of her husband waking up. She also fought to get him into rehab and then moved back home with her mother.

She said, “If we’ve got to bring him home, let’s make sure he has the best view in the world. If he’s going to be a body in a bed, let’s give him something to look at.”

First Matt started following them with his eyes and then started to communicate.

About three months after the incident, Danielle was holding him up in bed and trying to emulate what the therapist had done by having him grab a toy motorcycle in front of him. He had never done it before but this day, he did it, Danielle said. This was a good start.

The moment that Danielle realized that Matt’s personality was still intact was when they asked him what he wanted to eat. He responded with a whisper that you could hardly hear. “I kid you not, he says, ‘buffalo chicken wrap from Cheddar’s,” she said. Explaining that it was his favorite food. “We all whipped around because we all knew what he said.”

They got him another two and a half months of rehab and he came out walking with a walker.

Although it has taken some time for him to regain his sense of humor and long-term memory, forgetting everything about dating and marrying Danielle, he got to know and love her all over again.

Today they enjoy playing scrabble and doing yoga classes together. He recently started driving a stick shift car for fun because he loves cars.