GladWire
Animals Llama Gets Loose Yet Again. But When They Do Double Take, They... 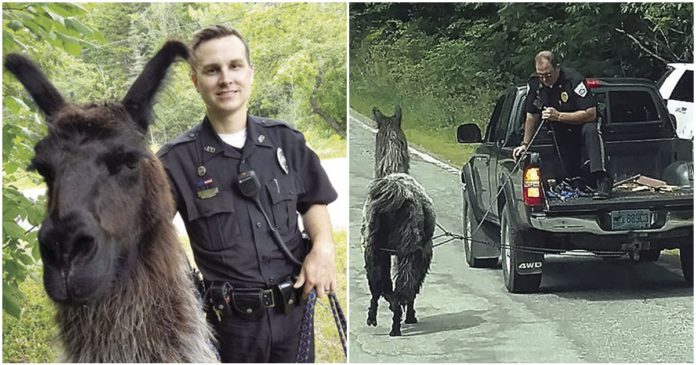 There have been countless strange animal partners over the course of time, but this guardian and protector took the connection to an entirely new level. Noir the llama has taken the special role of protecting a local family of ducks that come and visit him every single day outside of his enclosure. He had grown very fond of the family, and when he figured out that his best friends were in trouble, he would stop at nothing to save them.

Noir was found on a local golf course in his home town of Jackson, New Hampshire by police who had received a call about a runaway farm animal. His owner, Russ Miller, received a call that his llama had broken out. It is not exactly clear how the llama is breaking out (this is his second time breaking free and chasing a bear) but it is not uncommon for people to see him trailing a bear in hopes of keeping him away from the eggs of his duck friends.

“Noir was just starting to move between the fairway and a big patch of bushes when Ryan sprang into action, and ran in and grabbed as much llama as he could,” Jackson Police Chief Chris Perley said. “Half the battle is to catch a llama; the other half is to get him home.” Once the police officers had ambushed the escaped llama, they were able to wrap a rope around his neck and slowly work him back to the truck.

They attached the llama to the back of their pick up using a rope and drove him off of the golf course property at what they referred to as “parade speed”. “After going a little way, we stopped,” Perley said. “I don’t know how you tell if a llama is tired, but he looked it. I’m not sure how old he is, but there was no gray hair on his chin. I’m going to say he’s middle-aged.”

Thankfully, all parties ended up being safe and healthy at the end of the day. The ducks were safe, their eggs remained untouched, and the llama was feeling as daring and courageous as ever. The only thing hurting was the bear’s pride.

If you think that Noir deserves to be recognized for his amazing and brave chase, then share this story. With a best friend like this llama, these ducks should not have anything to worry about anytime soon in the future.