GladWire
Animals Lion Creeps Up Behind Weiner Dogs, You Have To See To Believe... 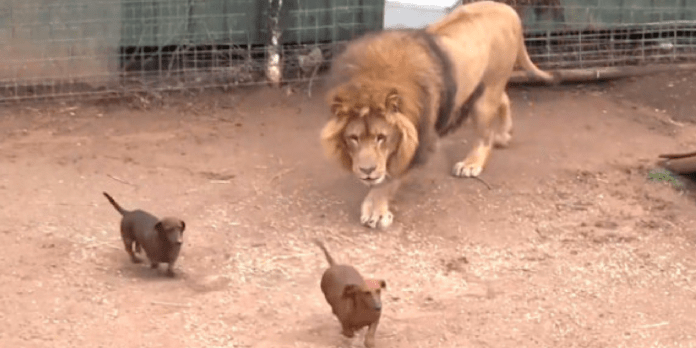 Bonedigger is a 500-pound disabled barbary lion who has a permanent home at the G.W. Exotic Animal Park which is located in Wynnewood, Oklahoma.

Bonedigger was born with a calcium bone disease that left him mildly crippled in his front legs.

His zookeeper, John Reike, has raised Bonedigger since he was only six months old. He bottle fed Bonedigger and raised him inside his home before he was too big and had to be moved to the park.

Reike lost both of his legs after a terrible bungee jumping accident. Reike

Reike spends all of his days taking care of the animals at the park, but he shares a very special bond with Bonedigger.

John Reike is not this seven foot long lions only friend.

Milo, an adorable 8-year-old mini Dachshund met Bonedigger when he was a just cub. Despite their differences in size, it was love at first sight!

The duo has been best friends for the last five years and according to the park, the two animals are inseparable and spend all of their days together.

The zookeepers believe that Milo can sense Bonediggers disability, which is why he wants to comfort and protect him- resulting in this outstanding friendship.

The two of them love to play and cuddle together… They even share the raw meat and Milo licks Bonedigger’s teeth clean. They take care of each other.

Milo has also learned to imitate Bonedigger’s voice and noises. He will growl and grunt to communicate with his best friend because lions communicate this way in their natural environment.

One of Bonedigger’s favorite things to do is lay on top of his hut with Milo and two other dachshunds named Angel and Bullet that are also residents at the park. The dachshunds will sometimes even sleep on top of Bonedigger.

“This friendship between an 11 pound wiener dog and a 500 pound lion is the only of it’s kind in the world ever seen,” he said.

This unique, one of a kind friendship goes to show that dogs and cats CAN be best friends!

If this special friendship warms your heart and you think more people should see this positive story, please SHARE it with your friends so that they can see it too!