GladWire
Awesome Combat Veteran Comes Across Head-On Collision, Then Does Unthinkable To Save Woman’s... 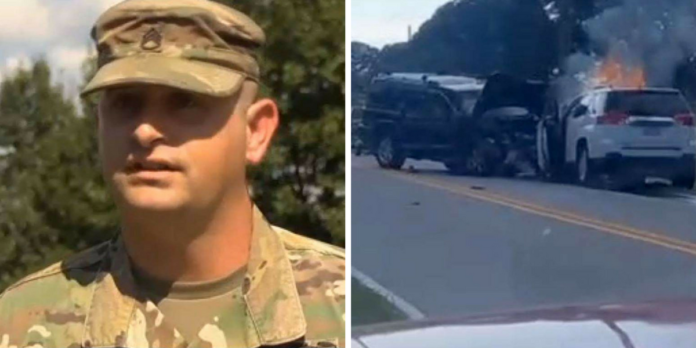 Soldiers see a lot in their lifetime, and sadly, it’s not always good things. They are used to seeing, and scoping out danger, and then protecting anyone who may be nearby. And I think they could all say that is had even become instinct and doesn’t leave when they return home. And this soldier has just proven to us how true that is.

Staff Sgt. Corey Hinkle an Iraq combat veteran was driving along the roads of Shelby, North Carolina when he came across a head-on collision, and it wasn’t looking good for anyone involved. But being the good person, and soldier, that he is, he knew the right thing to do was to pull over and make sure that everyone was okay. And it is a good thing he did!

As Hinkle approached the one car, he could see the woman in the driver’s seat struggling to get out. But what really caught his attention was the fact that the car was on fire. Hinkle and another man quickly rushed to get the woman out of the car, and far away from it as possible. As they knew what was about to happen. That car was about to explode.

The woman, Brandy Guin, was taken to the grass nearby, but Hinkle and the man weren’t about to leave her side. Instead, they began to shield her body as the car exploded around them.

“I’ve been in the military for 15 years. It’s instinct for me. I made the decision right then that if something came off the car, it’d have to go through me first,” said Hinkle.

Luckily, no one was severely injured due to the explosion. Hinkle said that he was slightly hurt after a piece of metal struck his foot, but they were all okay and were able to leave the scene all in one piece.

But this wasn’t Hinkle’s first explosion. When he was deployed in Iraq, he was one of the men who cleared roadside bombs and even had one blow up near him at one point. But all of that had helped him for this moment with the car. Because of that, he knew exactly what to do to protect the woman and those around him.

And as for Guin, she had broken her ankle in the crash and was unable to walk, which was why she was struggling to get out of the car. If Hinkle hadn’t been there, who knows what would have happened to her.

“I will forever be indebted to him,” said Guin.

We are so glad that everything turned out to be alright, and that Guin is alive and well thanks to Hinkle’s quick actions and thinking. Without his help, Guin might not still be here with us today. And if that isn’t something to rejoice about, I don’t know what is!