GladWire
Awesome Instead Of Writing Tickets, Cops Pull Awesome Move For Man When They...

There can be such a negative light shone on our police but these two officers are doing quite the opposite. Many may think the only thing police are for is to hand out traffic tickets but contrary to that, they are needed to protect and serve their community in many other ways.

Officers Justin Gower and Cale Hawkins were doing their normal patrol in Cedar Park, Texas when they came across what they thought would be a routine procedure. They saw a truck with a malfunctioning light and pulled the truck over to check it out. What they found when they approached the truck was much more alarming than just a broken light. 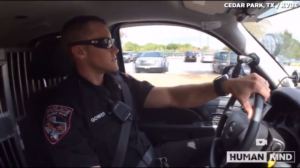 Gower explained, “When I was up there talking to the driver, that’s when I realized there was three kids in the back seat without car seats.”

The officer, being a father himself, was upset over the “extremely dangerous” situation. He said, “I have kids and I know how fragile they are, especially how young these kids were.” 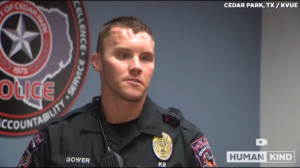 Doing his job, Gower was prepared to write out three tickets for the driver, each with a hefty fine, hoping it might knock some sense into the man, or act as motivation to go buy some car seats.

It was then when Officer Gower realized who the driver was. He had never run into him before but he had heard from other officers who this man was. Gower said, “you know, he’s saving money, he’s living in a car, he’s trying to get his family down.”

Gower realized giving the man three tickets including expensive fines would only cause more harm than good. He knew the man couldn’t afford the car seats and the fines would make things harder for the family.

Gower said, “Giving him three tickets, it wasn’t going to do any good.” He added, “Those kids are still going to be driven somewhere, somehow with no car seats.”

Gower then spoke with Hawkins who had recently come into contact with the man and remembered his story. 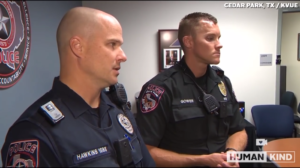 Hawkins said of the family, “They were living in a hotel and he said all of his money was going to that at this time.”

Both officers knew it would be morally wrong to fine the man but they also knew they couldn’t let the dangerous situation continue. They took their job responsibilities to the next level when they came up with a plan to help the family. 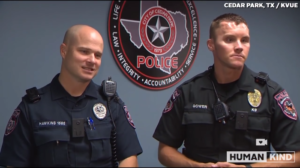 They took their own personal resources and bought the car seats for the children. “We just kind of stepped off to the side and said we need to kind of do the right thing and get these people some car seats,” Hawkins claimed.

Officer Gower kept the driver busy while Officer Hawkins went to the local Walmart to purchase the car seats. Anyone who has ever had experience with children knows that car seats aren’t the cheapest things to buy. 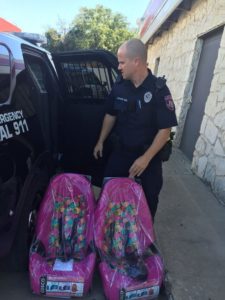 Neither officer was even bothered by the amount they spent on the car seats because they knew it was the right thing to do. They had to help the family keep their children safe.

Gower explained, “They’re trying to get things going, they’re going in the right direction and to issue them three citations for each child, would just devastate them.”

Hawkins says, “Money is not the issue, it’s the issue of can you help them, and so that was the easiest way we saw, the fastest path to helping them.”

The generous officers even installed the car seats themselves after meeting the family at a gas station. While the driver has opted to stay anonymous, he has made sure to express his gratitude to the officers.

The driver said, “It was nothing short of a miracle. It was something that was really needed. The officers have been a blessing.”

People helping other people for nothing in return is so badly needed and the officers have done a perfect job of showing that. They are doing everything they can to ensure their community is getting what it needs.

Are you thankful that

Article via The Epoch Times