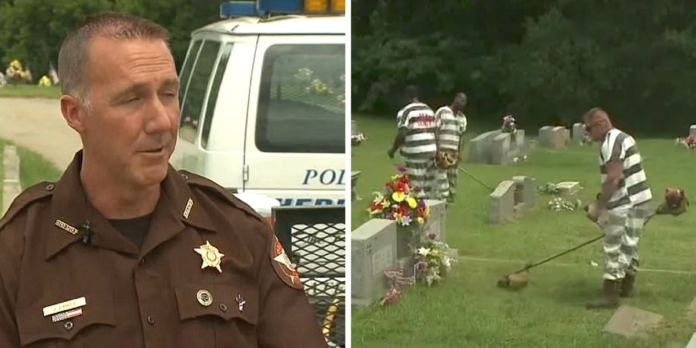 Lately, with the world being the way it is, you can only imagine how dangerous and scary working in law enforcement can be. And it definitely is not an easy job. But this story about an officer in a potentially dangerous situation has an ending no one was expecting, not even me!

In Polk County, a group of inmates were taken to a local cemetery and were going to be doing some work to make sure that it looked its best for Father’s Day. But even with low temperatures, the humidity was high, and it was causing some trouble for one officer. And before they knew it, the officer responsible for the group of inmates was on the ground, not moving.

Now you’re probably thinking that these group of men took his weapons, and ran away to their freedom. But they did no such thing. Instead, they got together and came up with a plan. But not an escape one. It was one to save this officer’s life.

They searched the officer for his cellphone, and as soon as they found it, they called 911. After they were told help was on the way, they then took off his vest and jacket so he was able to cool down, and were even getting ready to perform CPR. They were fully prepared to do whatever it took to save his life.

Shortly after, an ambulance arrived on the scene along with other police, and the officer was taken to the hospital, where he made a full recovery.

And as for the inmates, they got a little reward themselves. They were given the chance to go to the park and were able to enjoy some desserts and food. It was the perfect gift for them, and they thoroughly enjoyed themselves. And the definitely deserved it after their good deed!

We are so unbelievably proud of these inmates for making the right decision. Because of that, an officer’s life was saved.

Also, watch this gracious video of inmates who want to turn their life around… Amazing!