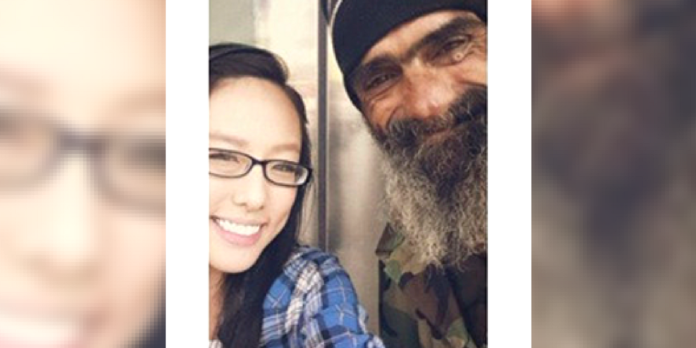 In contemporary society, interactions between the general public and homeless people tend to be limited. That’s often because the average person will usually go out of their way to avoid any contact due to the perception that they’ll be asked for money or harassed in some fashion.

Back in 2012, a young woman used the worldwide access of the internet to tell the story of her unlikely friendship with a homeless man named Tony. The woman, who worked near where Tony was situated, originally greeted him with a simple hello and then began to periodically have lunch with the military veteran.

The connection between the two had evolved enough where Tony would eventually be comfortable discussing his family, his stories of wartime service or even things she wasn’t all that interested in, like sports. In turn, she felt comfortable talking about her family and the problems that she was facing.

Those problems had become critical enough over the period of one month that the woman was on the verge of being overwhelmed by their burden. However, one person that was willing to listen to all of her troubles was Tony, who urged her not to give up on getting through this troubled period.

One day, the woman was still struggling with those problems and beginning to dwell into self-pity when Tony simply tapped her shoulder. After getting her attention, he proceeded to take a broken watch head out of his army jacket and softly place it in her hand. The watch head was an antique of unknown origin.

Immediately after Tony had given her the watch head, he told her, “I don’t have much but I wanted you to know that you have done what many others would not simply by being my friend.” He then walked away, with the woman then beginning to cry from the simple gesture of appreciation from someone less fortunate.

The woman’s story might have otherwise been ignored if not for her brother posting her message on the website, Reddit, which aggregates stories on any number of topics. Those stories are then discussed by the website’s visitors, with many of those that read the story about his sister and Tony visibly moved.

Many of their stories spoke about their own interactions with homeless people and noted how simply offering them money in an effort to get rid of them wasn’t what they were seeking. In most cases, that simple contact with another human being or being given respect, despite their appearance, was their main goal.

One of those readers indicated that they had been homeless and offered praise to the woman for making the effort to treat Tony with dignity.

“Every single time a ‘regular person’ treated me like a human being, it was refreshing and heartwarming,” the reader wrote. “I’m glad that Tony got the chance to touch your life, as I can confidently say that it probably meant a whole lot to him to be able to give back in some way.”

Pass on the kindness! SHARE this story and you may just inspire the next Tony!

If you liked this story, you’ll love this video of this guying helping the homeless through a prank! Watch below.