GladWire
Awesome Homeless Man Found Outside Of Animal Shelter. When They Learn Why, They... 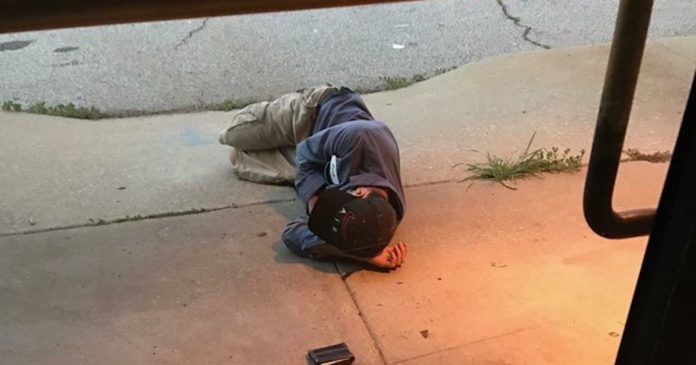 Sadly, you can find homeless people anywhere. But there is one place that seems a bit abnormal. An animal shelter. And that’s exactly where this young homeless man was found. But his reason for staying there was one that has been grabbing the hearts of thousands.

No, this man didn’t choose DeKalb County Animal Services out of mere comfort. So the workers were confused when they saw him sleeping right outside the front door.

As they began to talk to the man, they discovered this man’s story. They even found out why he choose there to sleep. And it broke their hearts.

“Our kennel tech woke him up, and the man said his dog had gone missing,” Sia Karen Hirsch, who is the spokesperson for the shelter.

He also mentioned that he had spent all of his money that he had collected in order to pay for a bus ride to the kennel. He was hoping that his dog would have been found, and picked up and taken to the kennel.

And he was in luck, as his lost dog had been picked up around 2 weeks earlier. But the problem? She was being held at the animal service’s new facility, which was all the way across town.

The homeless man was extremely upset, knowing he had no way to get there other than walking, and that would take too long.

The kennel tech felt terrible for the man. He knew he didn’t have any other way to get there. So instead of forcing him to walk, the kennel tech decided to cover the cost of the train ride over.

The homeless man broke down in tears. He hadn’t been shown such friendliness in a long time, and this just meant the world to him. He was finally going to be reunited with his best friend, and nothing could possibly make him happier.

At that point, rescuers at the facility had become acquainted with the little dog, who they named Tata. She was happy and healthy, and was just a loving dog.

When the homeless man arrived to pick up little Tata, it was clear to them that this little dog may not have had a lot while living with this man, but she was loved deeply, and loved him in return.

“You could see the joy in his face when they were reunited. It was wonderful. The joy for both of them was palpable. It lifted everyone’s spirit to see it. Love is love, no matter who it’s coming from. He probably puts the dog first in his life, because without her he doesn’t have anything,” said Hirsch.

The shelter was even so kind as to waive their normal fees for the man, in order to reunite them. As well as offering them assistance in the future.

DeKalb County Animal Services also started an outreach program, which is helping homeless people in the area care for their animals.

“Some people don’t understand giving a pet back to a homeless person, but some of those people take better care of their pets than some of us with homes. If you see a homeless person with a pet, and are hesitant to give them money, you can give them dog good, or even flea medicine. They are need bottles of water. Just basic supplies that humans and dogs can use. Their pet is sometimes the only thing they have in their lives,” commented Hirsch.

We are just so thankful that this man was reunited with his puppy. We could tell just how much it meant to him, and we wish them both the best!

If you loved how this shelter went above and beyond for this homeless man and his dog, SHARE this post!

Article via The DoDo and video via Tracy Hunton Thompson