GladWire
Animals Heroic Group Saves the Life of a Dog Stuck in the Ice,... 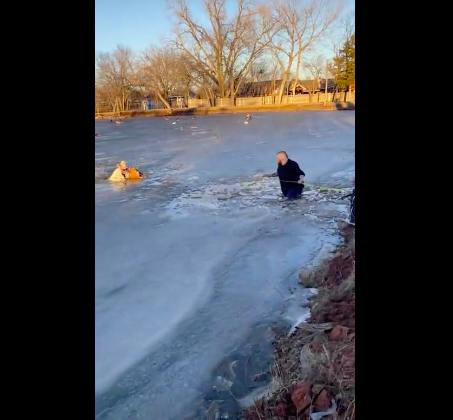 How many of you have seen a distressed animal in danger? If you ever do, what would you do? How would you do it? Well, this is how this group of heroic people helped save a dog trapped in a frozen lake.

Michael Ryan Wade, a local pedestrian in Oklahoma, was walking along a frozen lake when he spotted a distressed dog waiting to be rescued. As soon as he pulled out his phone to start a video, a man jumped in the lake to try to save the dog in danger. Nobody knows how long the dog was there or how it got there, it probably was walking on the ice and the ice broke, but they knew that it needed to be saved.
In the video it shows a man in the frozen lake with the dog trying to save it. After a couple people saw this, they started to help. Then a few more heard the commotion and came to help as well. There were a total of seven or more people along the lake willing to help in any way, shape, or form. All of this was caught on video.

The video starts out with showing one person in the lake trying to help this dog. He was trying to save it by lifting it out of the water and onto solid ice. But he was struggling. One of the people along the lake threw a rope out to the man in the lake to stabilize him while he was in the water. Soon after, the man lifted the dog out of the lake onto the ice. He then did the same. Both came out from the lake looking cold, but not severely damaged by the freezing water.

One woman in the video offered a place for the dog to warm up in her home because it was not far from where they were. It is cool seeing so many people show up to save the dog in need of a rescuer. I am glad that there are selfless people in the world willing to step up in times like this.