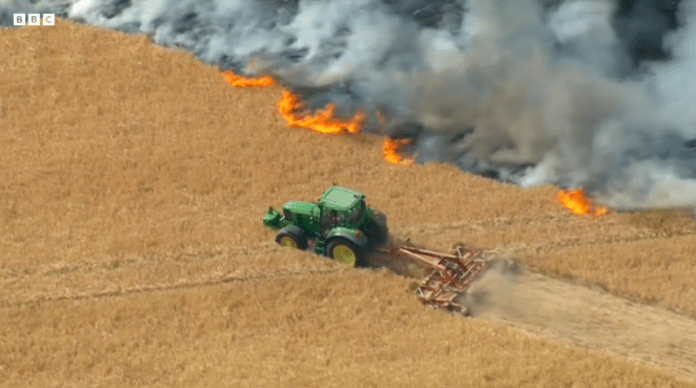 This weekend in England, a brave farmer rapidly thought on his feet to put out a fire that was spreading through a barley field.

To put out the flame, Bill Alexander used his tractor to plow a line through his neighbor’s farm. The flames, which were moving toward residences, were several yards away as he drove.

Around 3:15 p.m. on Saturday, Metro reported that the fire in Kent, England, had consumed over 20 hectares, or around 49 acres.

The perilous encounter was captured on camera by BBC News.

In the most recent tragedy, there were no casualties recorded.

The owner of the acreage in the video, Andy Barr, expressed his appreciation to Alexander for rising to the challenge.

Bill Alexander ⁦@WHAlexander1⁩ performing heroics in my field this afternoon – you made the national news Bill! #goodneighbour pic.twitter.com/AhUHSm5GY1

Barr wrote in a separate post: “Please tell everyone to be careful what they do along roads and paths, 20ha of spring barley up in flames.”

The incident was put out by Kent Fire and Rescue Service on Saturday afternoon before it could grow further.

“The fire has been brought under control and put out. Firefighters escorted persons who were in the vicinity to safety,” the fire service said in a statement at 4:50 p.m.

Alexander saved the day. The harm may have been far worse.

Barr also expressed his gratitude for the firefighters’ assistance.

Also many, many thanks to @kentfirerescue who were brilliant and are facing far too many of these at the moment pic.twitter.com/JTRlXz71Mw

“Eight fire engines, all-terrain vehicles, and a bulk water carrier have been sent to reports of a standing crop fire in fields on Lenham Heath between Maidstone and Ashford.”

“Crews are working hard to get the fire under control, which is covering approximately eight hectares.”

“Smoke from the fire may be visible on the M20 between junctions 8 (Leeds Castle) and 9 (Ashford), road users heading towards Maidstone are asked to take extra care.”