GladWire
Bad To Great During The Game A Ref Dropped With No Pulse But Then An... 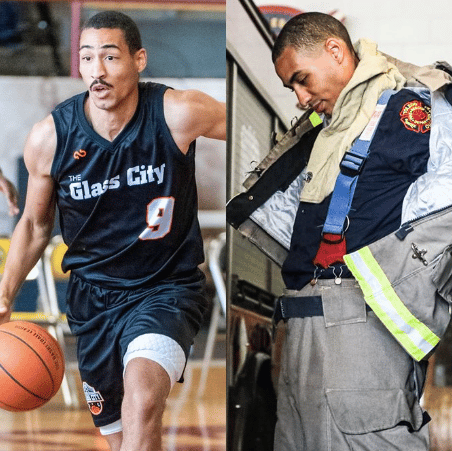 With the Toledo Glass City basketball team, Myles Copeland competes in minor league basketball. The 25-year-old enjoys playing basketball in addition to his day job as a fireman.

On June 11, the team was scheduled to play against the Jamestown Jackals in one of the games.

Front Office Sports posted on Twitter, “A firefighter who moonlights as a professional basketball player saved a life over the weekend. Myles Copeland, who plays in The Basketball League, worked a 24-hour shift at the station — then was called into action on the court.”

The referee, 61-year-old John Sculli, passed out unexpectedly in the middle of the match. He was having a heart attack, but no one knew for sure at the moment.

According to Fox News, Copeland hurried up to the downed official and into what he described as “firefighter mode.”

Sculli had no pulse and was not breathing. His nursing wife believed he was dead and hoped Copeland might revive him.

Copeland provided CPR for five minutes until paramedics took over and arrived. The referee was laughingly joking that he could handle going back out and finishing the game by the time they arrived and put him onto a stretcher.

Sculli allegedly underwent triple bypass surgery, and according to his family, who spoke to Inside Edition, he is doing well.

But if not for Copeland, recovery might not have been been a possibility.

“I run towards the emergencies, I don’t run away from them,” Copeland told Inside Edition.

“The basketball game just didn’t matter anymore, it was about saving his life,” he continued.

Goodable said on Twitter, “This is Myles Copeland. When he finished his 24-hour shift as a firefighter, he went to play in a playoff game with his basketball team. When a referee collapsed during the game, he rushed over, performed CPR, and saved his life. Then he helped his team win the game.”

Copeland returned to the game after Sculli was taken to the hospital, and his team won.