Roland Handel’s family had just enjoyed a family barbecue and were preparing for bed the night the California wildfires spread their way to Sonoma County. It was there that Roland and his family owned a barn, and the flames threatened to destroy their home and livestock.

Roland, knowing he had to act before the fire overtook his property, gathered his family and as many of the animals living on his barn into his hatchback and trailer as fast as he could.

Roland went to fetch Odin, his Pyrenean Mountain Dog who had been entrusted with protecting his goats from coyotes and mountain lions. As Roland approached the pen, Odin patrolled back and forth in front of the goats. He then sat firmly in the grass between his owner and the herd.

The dog’s expression said it all: This courageous canine had no intention of abandoning his flock. No goat would be left behind by this dog. 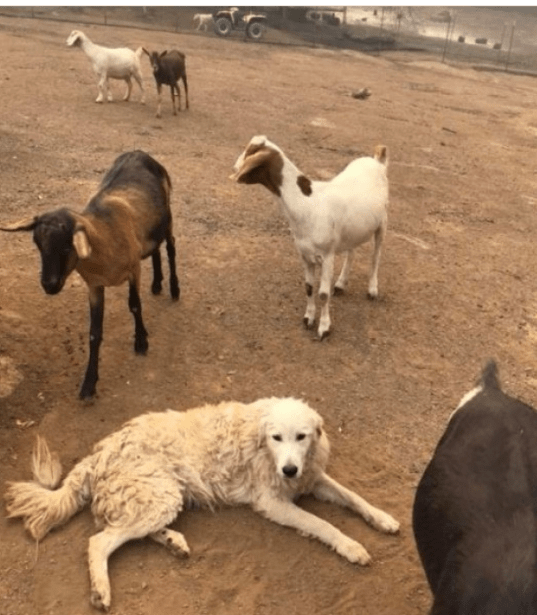 Roland now faced a troubling dilemma: There was no time to gather the goats into the trailer, and Odin wouldn’t budge without them. Roland’s fourteen year old daughter and his other animals waited nervously in the car as the winds picked up speed and the flames grew fiercer.

Not knowing what else to do, Roland opened the gates so the animals could attempt to escape and fend for themselves.

“It was life and death,” Roland said.

Roland drove off, promising to come back as his soon as it was safe to do so.

When he returned, his property was in ruins. Ravaged by the flames, his barn and belongings were gone. Everything had been reduced to rubble and ash. “I couldn’t believe it,” Roland said. “Everything else is gone. There’s nothing.”

As Roland walked through the devastation, he then saw a miracle had taken place. From the devastation, eight goats eagerly ran forward and cuddled up to him. “The goats were there,” said Roland. “Eight goats and he didn’t lose a single one.”

Among the goats limped a great wooly dog. It was Odin! Odin hobbled up to his owners and greeted them with slobbery dog kisses. He was tired and weak, his whiskers had melted, his paw pads had been seared, and his fur had been singed a different color, but he was alive! “We feel really blessed,” Roland said.

Reunited with his owners, Odin was soon taken to the vet and given a full check up. The prognosis was positive. “He’ll make a full recovery. He’s going to be back with his goats,” Roland said. 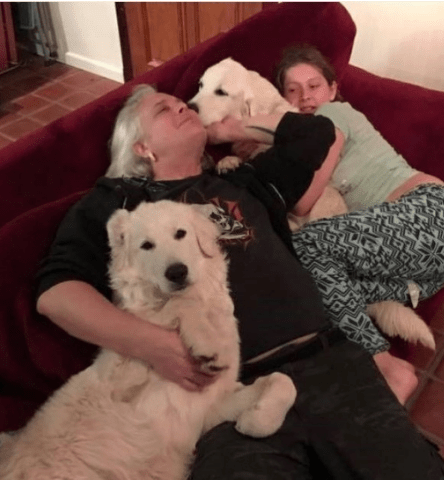