GladWire
Animals Dog Throwing Tantrum After Not Getting What He Wants Will Have You... 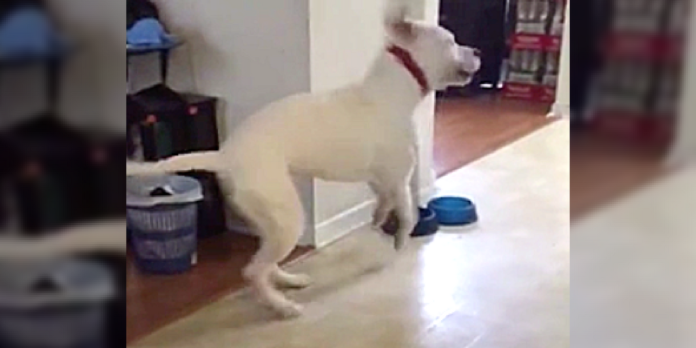 Gregory Alexander Waters is a spoiled dog who loves to get what he wants. One day, he wasn’t so spoiled and he threw the funniest temper tantrum we’ve ever seen!

I would have never thought to give a dog gravy, but Gregory goes crazy over it. He has come to like soggy gravy covered dog food much more than the usual dry food.

One day, when Aunt Boo didn’t include the special treat in his food, Gregory approached the bowl and found out. He wasn’t happy at all.

He threw a doggie tantrum and rolled around on the floor and barked like crazy, thinking that if he did so, she would finally cave in to give him what he wanted.

Aunt Boo explained that he couldn’t have gravy in his food every time he ate and he still didn’t like that response.

He continued jumping around and acting crazy until he slipped and fell on the tile floor.

Aunt Boo never budged, and said to him, “See, that’s what you get! Buffoon!”

This video of this spoiled pup has gone viral on Facebook, and many people are loving Gregory’s reaction below!

If Gregory’s tantrum made you laugh and smile, please SHARE this!

If you love spoiled dogs and their hilarious reactions to their owners, you have to see this video of Riley.