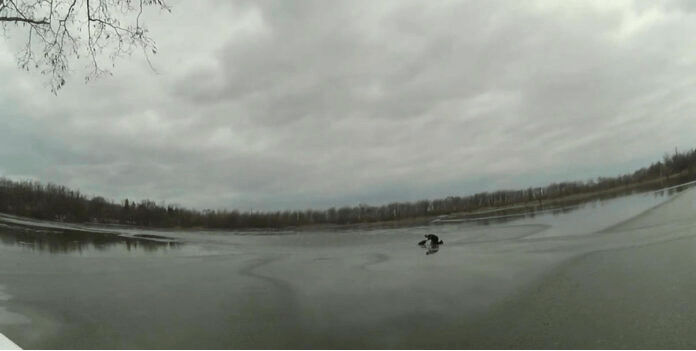 Ice is very dangerous to walk on. Ice forms on a river when the temperature is below freezing and the water molecules on the surface freeze to form a layer of ice on the top of the water. The Olean Fire Department stated, “River ice is very dangerous and should never be trusted to support the weight of a human. Ice thickness in the same area of the river can vary from a foot to a fraction of an inch. Be careful near riverbanks in the winter, as they will be icy and slippery.

While pond ice on Forness Pond may at times support the weight of people, river ice should never be taken for granted. Regardless of the temperatures and the appearance of the ice, underwater currents can cause thin spots to develop.”

One day the police got a call from a worried dog owner about his dog, Kona, a 10-month-old puppy. The owner and Kona were walking along the lake when all of a sudden, Kona spotted some birds ready to land on the ice. Kona, being very excited to catch some birds, decided to sprint full speed along the ice to try and catch the birds. But before he knew it, he was stuck in the ice struggling to stay afloat.

Kona’s owner watched as this was happening and was shaken when he saw his dog fall in the water through the ice. He called 911 and they sent 3 officers to try and help with the situation.

As soon as the 3 officers got there, Officer Smith immediately started running closer to the dog. He quickly ran and took his vest and his gun belt off. As soon as he went over the ice he slipped and fell but quickly recovered. He was careful to not lean his weight too much at once and finally got to Kona. He pulled the 75 pound puppy out of the water and to the surface. They got back to the bank and Kona’s owner was super happy to see that he was ok.