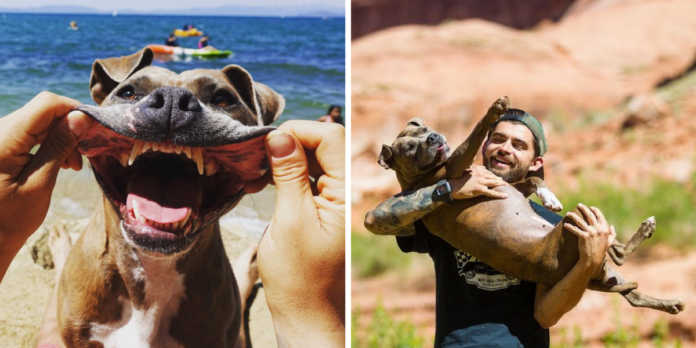 For the first year and a half of Penni’s life, she was confined to a basement in a drug house. On top of not being able to see the light of day, she went through terrible verbal and physical abuse on a daily basis.

When the cute pit bull was finally rescued, she was afraid of everything. Her rescuers were concerned that she might not easily find a home because of all of the issues she brings along with her.

Regardless of her little quirks, she found a new and loving dad, Blaine DeLuca. 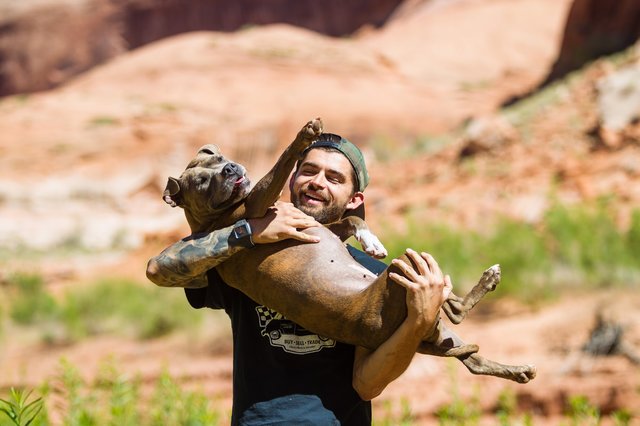 For the longest time, DeLuca searched for the perfect dog to call his ‘fur baby’. When he met Penni for the first time, he knew almost right away that she was meant to be his.

When he went to meet her they warned him that she might need time to get used to him, as she was very shy. As soon as the two met, Penni gave him a big kiss and sat in his lap.

After bringing her to her new home, he saw first hand, that her past heavily affected her. Objects, people, and places were among many things that made Penni feel scared.

DeLuca said “You could see it in every inch of her demeanor. She was absolutely terrified of everything under the sun. It was awful. It was an uphill battle for quite a while. I couldn’t even get her to walk. She would just sit in the corner with her head down. Six months, no eye contact; she was a full-blown disaster at that point.” 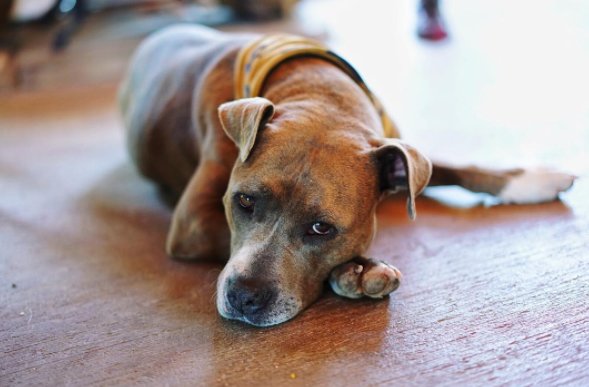 Regardless, he refused to lose hope in her. Everything he could do to help Penni adjust to the world around her, he did.

He introduced Penni to his friends’ dogs and even found a roommate in New Jersey who had other dogs too.

In New Jersey, it was cold a lot of the time so it was difficult to spend a lot of time outdoors. Being downtown in the city could have also reminded Penni of what she went through in the past.

These are some of the factors that led DeLuca and Penni to move to Las Vegas.

Life for the pair started to turn around. Not only was the weather much warmer, but there were so many sights for the two of them to see. 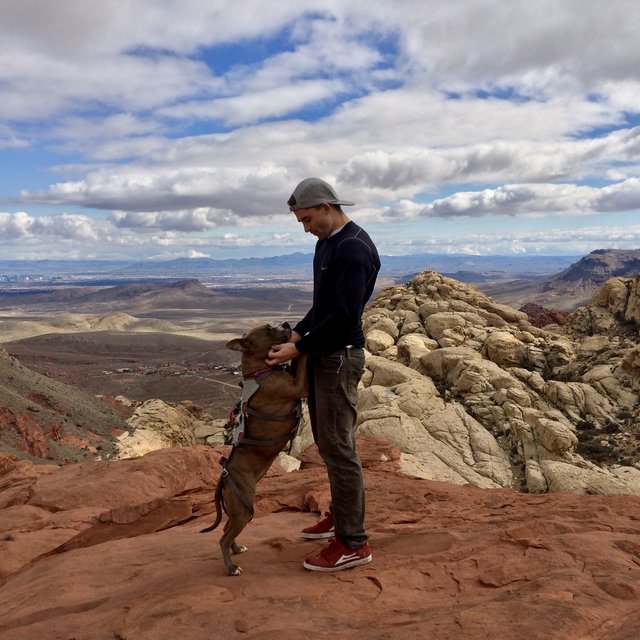 Penni and her new dad spent so much time outside hiking and exploring the beauty of their new home. DeLuca said, “At that point, I could really start to see her demeanor change. I realized how much she enjoyed being outdoors. We’ll sit inside and she’s just a normal dog, but as soon as you open the door to go outside, even if it’s just for a walk down the sidewalk, she just bolts into pure happiness.”

While getting used to life in Las Vegas, DeLuca made friends who shared the interest of hiking and exploring the outdoors. This helped Penni to be more comfortable around other people.

Through all of her new adventures hiking Red Rock Canyon, Beaver Falls and other places, Penni transformed into a completely happy dog who enjoys the life she lives.

Her dad says, “She was terrified of anybody that walked anywhere near her. If the door to the house opened, she would be in the bathtub. Now she comes to the door, tail wagging. Even every inanimate object, like if I pulled out a basketball, for instance, she would take off in the other direction, versus now, she’ll sit out in the driveway with me when I’m shooting a basketball.”

With the amount of time that the duo spends outside, they were introduced to so many adventurous activities. Penni and her dad go hiking, rappelling, and yes, even zip lining. 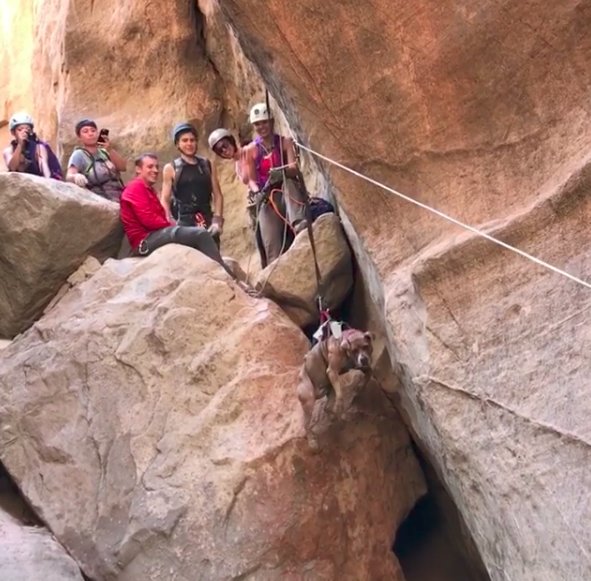 With every new adventure and challenge, Penni faces, she fully trusts her dad and is always down for a new adventure, even if it means cliff climbing. 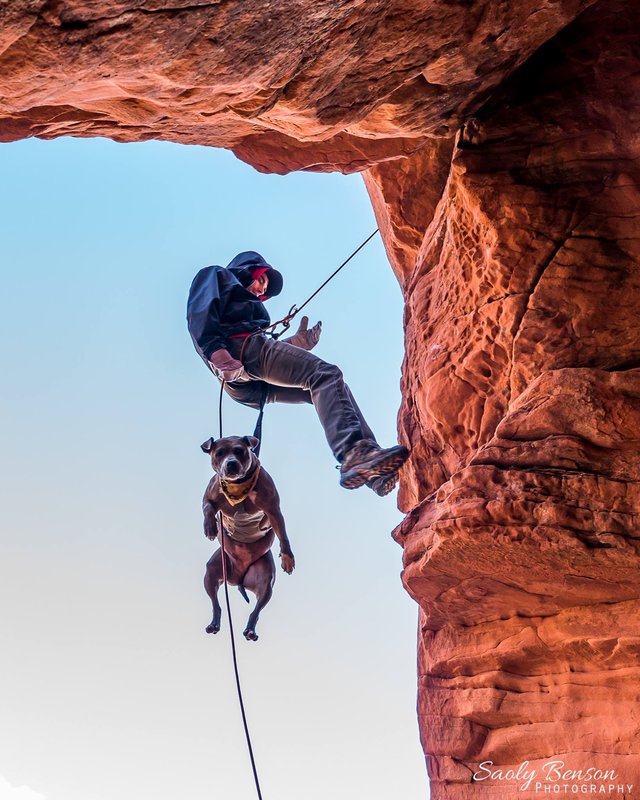 “On the days I’m wanting to go do something and I maybe can’t find anybody to go with me, it’s awesome to know that I’ve always got her. There’s not one time where I’ve ever taken her out where she wasn’t excited, wasn’t ready.” DeLuca said.

Penni began her life trapped inside a dark and cold basement, hardly ever able to see light. Now she gets to go on crazy adventures and help not only herself but the whole world as well.

When people see this brave pitbull climbing down the sides of mountains, it always starts a conversation. People are often amazed by how calm and trusting she is, so by her example, she is able to help change the way people view pit bulls. 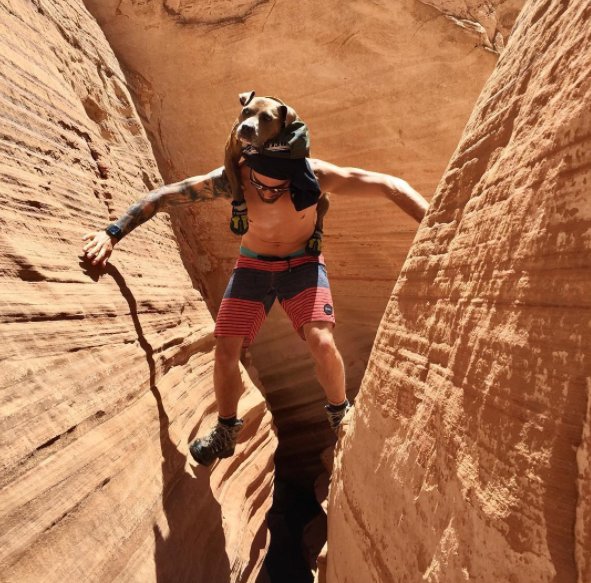 If you are excited for Penni and her opportunity to seek adventure with her dad, please SHARE this with your friends and family!