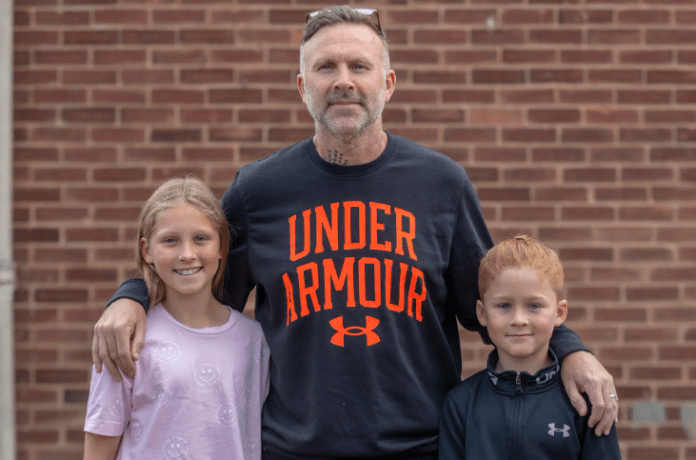 A dad of two had been dead for about 18 minutes when his kids revived him.

48-year-old Stuart Waters went into cardiac arrest when he was behind the wheel.

He was driving Sadie, 10, and Jude, 7, back from football practice one evening

Out of the blue, he felt ill and became unresponsive. His children immediately got out and ran for help. Stuart said, “The police officer there at the time said that, in that situation, the likelihood of surviving was one in 10 but thankfully I was the one. It’s never something you want your kids to see but it’s a very proud moment – obviously for the wrong reasons – but I am so proud of them and couldn’t ask for better kids.”

“At the end of the day they helped save my life so I owe them big time.”

“I don’t quite think the kids quite realize the full extent of what happened, they just did what came naturally to them, but I think deep down they do know what an incredible thing they have done.”

Recalling this horrible moment Sadie said, “Before it happened, Dad said ‘oh no it’s happened again’ which we didn’t know what that meant so Jude stayed in the car. I was confused but also scared at the same time because I didn’t know what was happening or what to do so I just ran to the house and began knocking on the door.”

Jude continued, “Sadie ran to the door to get mom who was in the bath and I stayed in the car to see if dad was OK but he didn’t reply. I was really confused because I didn’t know what happened, scared and a bit sad.”

Jude decided to take his dad’s seat belt off.

Stuart’s wife ran for help when she pieced together what had happened.

She said, “I ran out to get some help and two ladies, Emma and Gemma, came out. They got Stuart out of the car and did CPR in the road. Then the emergency respondents came and everyone was working on him for ages.”

“They wanted to put him in a coma and take him to King’s College Hospital in London because he wasn’t responding as they had hoped. But they put him in the back of an ambulance and continued to work on him as they took him to Pembury hospital.”

He went to the hospital and the doctor said that “Luckily the scans showed everything was OK and it would just take a little time for his memory to come back.”

He was legally dead for about 18 minutes.

Stuart said, “A big thank you goes to the neighbors, Emma and Gemma especially, who performed CPR, and our other neighbors that helped. Thanks to my wife and kids, the emergency services, work has helped me and the football team too; as well as the kids’ school, Skinners’ Kent Primary.”