GladWire
Awesome Crazy Things Happen On Planes But After What This Couple Did Nobody... 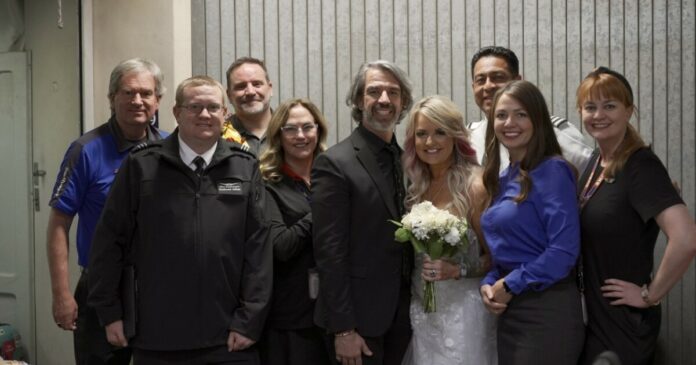 The Oklahoma City couple, Pam and Jeremy, flew from Oklahoma City to Dallas in full wedding attire when their connecting flight was canceled. Other people heard them and quickly booked the couple with another Southwest flight.

As they were on board, an ordained minister was also there and spontaneously asked if the couple wanted to get married on the spot. He offered his help and the couple took it. Many of the other passengers helped them make their dreams come true. The passengers signed a makeshift guest book and all hung toilet paper streamers inside the plane.

Southwest Airlines posted on Facebook, “Last Tuesday, Pam and Jeremy joked that they should hop on a plane to get married in Vegas. It wasn’t long before both realized that the other wasn’t actually kidding, so they booked a flight for Sunday on one of our competitors, with a Vegas wedding chapel appointment Sunday night.”

This is when their flight got canceled so people arranged a new flight for them.

“Chris, another passenger traveling to LAS from DFW, overheard Pam and Jeremy discussing how they might still get to Vegas in time for their appointment. Chris also happened to be an ordained minister and offered to marry the couple himself!”

Captain Gil greeted the couple, who happened to have full wedding attire on, and mentioned that they should get married on the flight. To everyone’s surprise, they said, “let’s do it!”

“Our Flight Crew sprung into action with toilet paper streamers and a snack mix sash for Chris. Julie, one of our Flight Attendants, stood in as Pam’s Maid of Honor. A professional photographer on the flight pulled out her camera for official wedding photos. Another Passenger passed around an old notebook for the whole cabin to sign with well wishes and their seat numbers, which was given to the bride and groom as a makeshift guestbook.”

The post ended with, “Congrats to the newlyweds on a memorable inflight wedding neither our Employees nor Passengers are likely to forget! We can’t wait to welcome you back onboard the love airline. #SouthwestHeart”