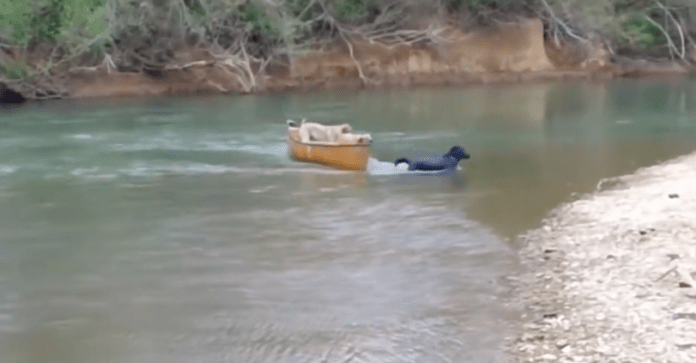 One day, three dogs and their owners were kayaking in a river. They were all having a lot of fun, especially the dogs. As they were kayaking they saw a bank and they decided to stop at it to take a little break. Everything was going smoothly until the unexpected happened.

The canoe that they were all in started to drift away from the wind because it was a lightweight canoe. The two golden retrievers that were with them as a part of their family went to chase after it and jumped in the canoe before it left too far off shore. Golden retrievers have an instinct to retrieve things, hence the name golden retriever. But a couple seconds later, they were floating out into the river with the current.

Struggling to get to the canoe, the black dog swam as fast as it could against the current to save its friends. When it reached the canoe, it grabbed onto the rope that the other two dogs put out and started pulling them to shore. The three dogs finally reached shore and they were so happy that they survived the harsh journey into the river.

Just like the dog that swam to save its friends, we need to help our friends in need as well. It is crazy how smart and compassionate dogs are. They truly are amazing animals and we can learn so much from them.