GladWire
Awesome Couple On Walk Find Camera Along Shore-When They See The Photos, They... 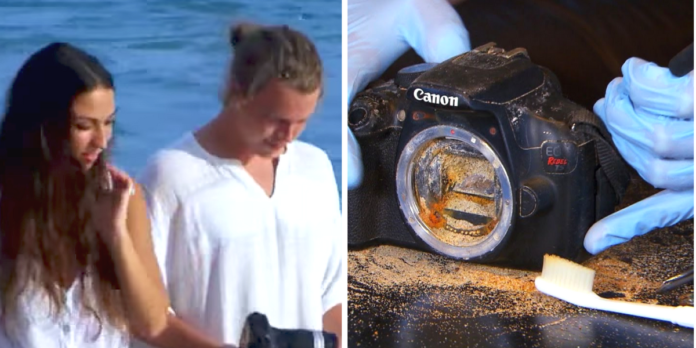 There are many different places to get married. Some prefer to get married in a church, others like places outdoors, like the beach. Others may even like a barn wedding. It all goes with the couple. But for this couple, the beach was just the perfect place.

That is until that perfect place became their worst nightmare.

High School sweethearts, Heather and Kole, knew they wanted to get married on the beach from the moment he popped the question. So when it came time for wedding planning, that’s exactly what they did. And everything seemed to be going perfectly.

The couple’s wedding was picture perfect as they tied the knot at Laguna Beach. They had their guests place their cameras and purses along a nearby seawall after the ceremony, and were enjoying time together when out of nowhere, a wave came crashing down. And to make it better (hint the sarcasm) the wave took along the precious items that were supposed to be safe and secure. And one of those items, as their wedding pictures from the ceremony.

The couple raced into the ocean after the camera, but those precious photos, the ones that they specifically had someone capture as they said their “I Dos” were gone in the blink of an eye. In that moment, the couple knew that they would never see the pictures, and they were just going to have to be okay with it.

Two months had gone by, and another couple, Alex and his girlfriend Maria had been strolling down the same beach. They were enjoying some nice quality time together, when Alex stepped on something hard. When he looked down, he realized that it wasn’t a sea rock, but instead it was a camera. But to them, it was extremely odd. Who would just leave a camera on the beach?

They gave the camera to Maria’s brother, so he could get a good look at it. But pure shock was written on his face when he was able to get 172 pictures off of the camera, and got a good look at them. Those pictures? Heather and Kole’s wedding pictures.

So of course, being the good people they are, they posted a few of the pictures on Facebook to see if anyone would recognize the couple. And luckily, a friend knew exactly who they were.

“I screamed and yelled ‘Kole! Someone found our pictures!'” Heather said.

Heather and Kole couldn’t get over just how amazing it was that their once in a lifetime photos were found, and we can’t either! We are so unbelievably happy for them!

If you are thankful that this couple got their wedding photos back, SHARE this post with your friends and family and watch these other adorable wedding videos.