Sometimes, you can just be going about your day and never know that something horrible is going to happen.

Carolyn Hamilton and her husband, Jeff, found this to be the case one night when they were preparing to go out with Albus, their family dog. They put the dog in their truck and started the engine, not knowing that they were soon going to get the scare of their lives.

Her husband went back into the house for just a few minutes, which happened to be long enough for someone to steal the car. Hamilton recalled to WBRC, “We instantly called 911, and Truckee Police saturated the area. Truckee Police were dedicated to finding this dog.” 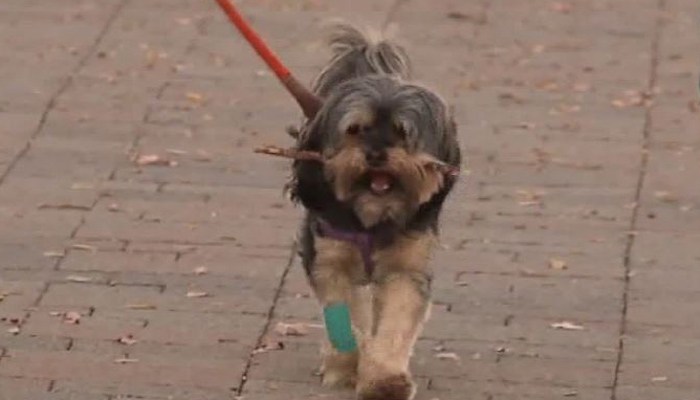 The police viewed security tapes and saw two men taking items from a car that was located nearby at the time. They came to the conclusion that these were the same two men who were responsible for the disappearance of the Hamiltons’ truck.

They located the vehicle and started chasing it, following the truck until they got to Reno, Nevada. However, at that point, the police had to stop chasing the car because it was too much of a risk.

The Hamiltons could only wait at that point, hoping for good news. They had volunteers help them put up flyers, but two full days went by with no news or sign of hope concerning their car or their beloved dog.

However, after the third day, they got a call saying that their car had been found in a Reno neighborhood. Best of all, their dog was still in the car and was safe. Hamilton recalls how she felt when she got that call, saying, “immediately, every emotion ran through us.”

Albus had been locked up in his crate in the back of the car for that entire three days. He was hungry and dehydrated, but given the situation, it could have ended up much worse. Overall, he was fine. Hamilton was very upset when her car and dog were stolen, but she also believed that it was not the biggest tragedy that could have happened. She knows that a lot of people have lost their pets and their homes in the recent wildfires that have taken place in Northern California.

She stated, “We tried to always compare our grief to the larger grief. And I think what happened is that we were able to just be a little more compassionate for people who experience loss.”

The officers are still trying to find out who was responsible, but the story did have a happy ending.

Phew! I’m so glad little Albus is okay! SHARE if you love your pet!