GladWire
Awesome Cop Gets Call About Child Abuse Victim-Little Did He Know The Call... 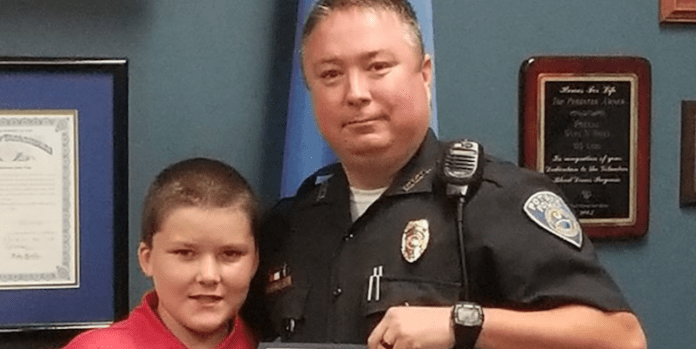 It was just two years ago when Officer Jody Thompson heard the call about a child being physically abused. And although he wasn’t on duty, that didn’t stop him from responding to the call. And now, he’s extremely glad he had.

Before Thompson had joined the police department, he was an investigator for the district attorney’s office. He had handled a lot of abuse cases, so this was nothing new to him.

“I investigated child abuse cases before. I thought I’d better go ahead and respond,” said Thompson.

But his heart broke when he heard the case, and saw the abuse for himself. When he arrived, he saw a severely underweight boy, his wrists had been bound by belts, and bruises covering his back. Not to mention the knot on his head. He looked terrible.

And as if that wasn’t bad enough, he had been submerged in a trash can full of cold water. And at just 8 years old, he weighed nearly 61 pounds.

“He did not have a spot of his body that didn’t have a bruise of abrasion. It was the worst thing I’ve ever seen,” said Thompson.

Thompson immediately covered the boy, John, with a blanket, and then drove him to the emergency room, where he sat with him the whole time, even after John was admitted to the intensive care unit.

“When I’d seen him in that house shivering and his hands tied — just soaking wet and confused — I knew at that moment the only time I would be satisfied and sure that he was safe is if he was with me,” commented Thompson.

It was the very next day that Thompson decided to contact the Oklahoma Department of Human Services (DHS) and became a certified foster parent. Days later, he was able to bring John home.

“At the time, I had a 15-year-old son and an 8-year-old son. When I brought John home I didn’t tell them or my wife. Everyone knew…they trusted I was doing the right thing before they even knew what happened and heard the story,” Thompson said.

But the story doesn’t stop there.

Thompson and his wife found out that his wife was pregnant just 2 days after bringing John home. They were expecting their third biological son. But to make things even crazier, the family was informed that John’s biological mother had given birth to a baby girl while in jail. And then asked if the Thompson’s would take her in. 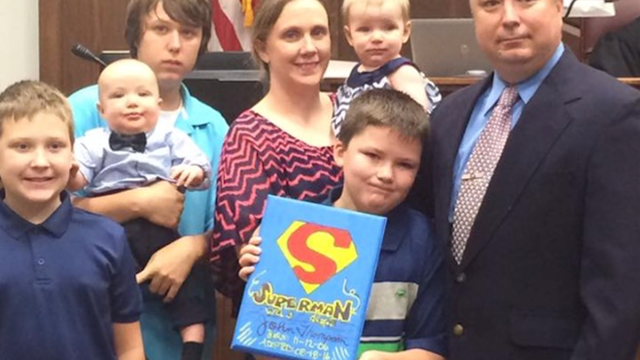 “We literally picked her up in the hospital the next day when she was a day old and brought her straight home. Never in my life did I dream of having a large family, but God had different plans and so here we are. And I’m loving it all,” said Thompson.

The family was then able to adopt John after his biological parents relinquished their rights. But refused to give up their baby girl Paizley. But after a few months, the parent’s rights were terminated, and the Thompson’s were able to finally adopt her as well.

They are just so overwhelmed with their new family and are loving every minute of it. They are such a compassionate family, and we are so thankful that nothing worse was able to happen to John.

If you are thankful that Jody and his family stepped up to take in John and his baby sister when they needed it most, and have provided such love and affection towards them, SHARE this post!